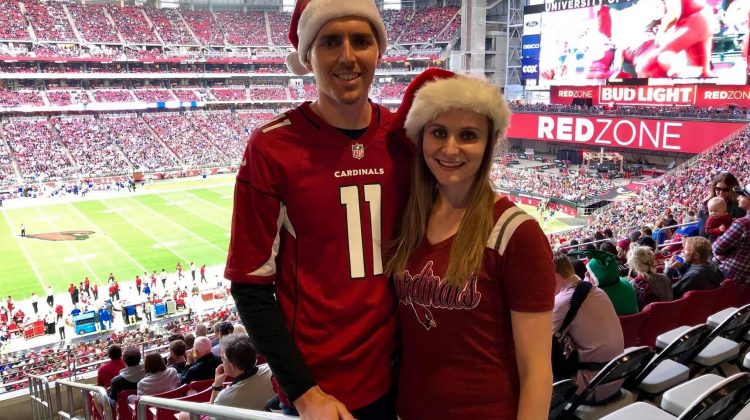 If anyone had doubts about the NFL’s ability to power through adversity, the 2020 football season put them to rest. Through a shortened offseason, empty stadiums and multiple postponed games, the league managed to hold a full season.

Now, with Super Bowl LV just days away, CBS is honoring front-line workers who led the fight against the Coronavirus pandemic in NFL cities as part of its coverage leading up to the game.

Haley Bowser, a nurse at Dignity Health Mercy Gilbert Medical Center, was selected as the Phoenix area’s representative. During her virtual interview with CBS, she was surprised by Cardinals safety Budda Baker, who expressed his gratitude for her efforts and encouraged her to continue saving lives.

This NFL season wouldn’t be possible without essential workers.

So NFL players past and present surprised essential superfans to show their appreciation. pic.twitter.com/gYN427Saqz

Bowser’s unit at Mercy Gilbert was the first to treat COVID-19 patients when the virus reached Arizona in March of 2020. Before the pandemic, her team dealt mostly with patients suffering from serious heart issues, but they have since moved to treating Coronavirus patients full-time.

Growing up in Chandler, the Cardinals were a constant presence in Bowser’s young life. She would regularly watch their games on Sundays with her father and the team held events in her neighborhood from time-to-time.

“In elementary school the Cardinals put together a training camp kind of thing down at a local park,” Bowser said. “They did that at the park one year and then another year we actually got to go to their training camp facility, which was really cool.”

The team’s involvement in Bowser’s life continued through her time at Chandler High School, as players would show up on campus for Chandler’s annual football grudge match against Hamilton High. Larry Fitzgerald and former Cardinals running back Tim Hightower were two of the most frequent visitors.

“Larry actually filmed some of his commercials on our campus,” Bowser said. “It’s been awesome to see just how much the Cardinals are out there in the community. It’s just a bunch of different little things they’ve been doing that have just been amazing to see.”

Bowser’s run-ins with the Cardinals throughout her youth molded her into a passionate football fan. Although her work understandably attracted the bulk of her attention this season, she normally watches every single game.

“Getting to really interact with the Cardinals growing up helped kind of grow that love for sports,” Bowser said. “This year was a little different with work being kind of unseasonable, but I tried to watch as much as I could.”

While all of the front-line workers that CBS interviewed have played a vital role in the fight against COVID-19, the work of Haley’s team is especially worthy of recognition given the current state of affairs in Arizona, which has one of the highest infection rates in the country.

While the NFL season is drawing to a close, the struggle to combat the Coronavirus wages on, and there is much more at stake for Bowser and her team than just a trophy.