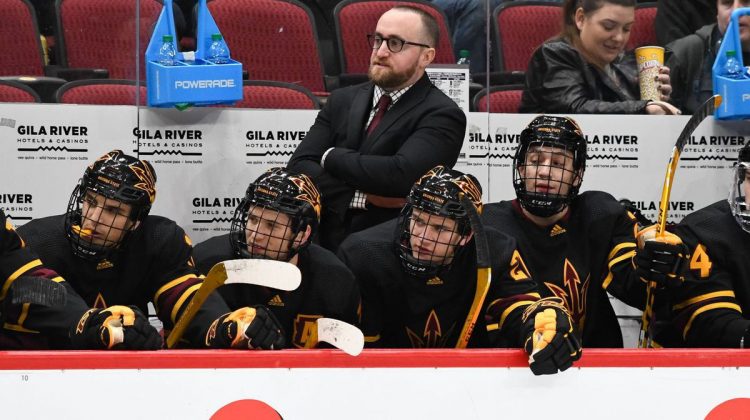 In the midst of a brutal 2020-21 campaign mired with injuries, long road trips, and frustrating losses, the Arizona State hockey team got to enjoy a brief escape from its troubles by playing a two-game home exhibition set against the U-18 United States National Development Team.

The Sun Devils performed admirably against the best 18-year-olds in the country, earning a series split and building some much-needed confidence ahead of their showdown with Michigan State on Feb. 13 and 14. As good as Arizona State looked, it was two future Sun Devils playing for the National Development Team that stole the show.

Defenseman Ty Murchison and forward Matthew Romer were two of the National Development team’s lesser-used players this past weekend, but the two ASU commits made the most of their ice time and gave Sun Devil fans an idea of what to expect from them in the coming years.

Murchison, a native of Corona, California, proved that he could hold his own against NCAA competition. Despite playing on the National Development Team’s third defensive pairing, he was one of their more prominent blue liners during the series.

He showed tremendous poise against ASU’s strong forecheck and managed the puck very well, especially in the defensive zone.

On the other side of the puck, he was a disruptive force, consistently breaking up passes and forcing opposing puck carriers to the outside. He was physically involved but disciplined as well, managing to stay out of the box in what ended up being a penalty-filled affair between the two teams.

The U17s make it a 3-0 lead on a goal from defenseman Ty Murchison.

Team USA with numbers and Murchison is the trailer and he buries it from the high slot. #NTDP pic.twitter.com/xoTddbHTUl

“He’s ready,” ASU head coach Greg Powers said. “He can help us right now. He plays with some grit and some moxie that is going to be a welcome addition. He’s big, he can skate, he can defend, he’s a hell of a player.”

Murchison’ addition to ASU’s roster next season will help to offset the impending departure of senior Jacob Wilson, who has brought a distinct physical presence to the Sun Devils’ defense for the past four seasons.

While Murchison does not throw the same thunderous open-ice hits that have made Wilson a fan-favorite, he has all the skills necessary to be an impact player for years to come.

While he was less prominent than Murchison, Romer also gave ASU fans an idea of what he could do during the two exhibition games. He looked promising as a checking-line forward, winning several puck battles along the boards and showing a willingness to lay the body when needed.

Romer’s line did not drive the play offensively, but he did manage a few scoring chances in the little offensive zone time he got. Given the number of forwards that ASU will lose to graduation, it is entirely possible that Romer could see an expanded role and be a viable scoring option for the Sun Devils next season.

Murchison and Romer’s decisions to play college hockey at ASU is a testament to the job that Powers and his staff have done to attract top-end recruits.

Prior to their commitments, Josh Maniscalco was the only player to go directly from the National Development Team to ASU, and if his career and maroon-and-gold is any indication of what to expect, Murchison and Romer should be in for fruitful careers as Sun Devils as well.