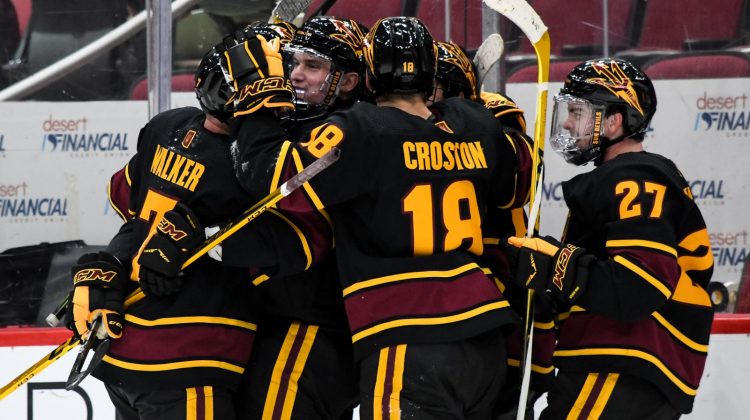 Arizona State’s 5-9-2 record may appear underwhelming on the surface, but the Sun Devils have quietly put together a solid season despite a lack of wins. Through injuries, heartbreaking losses, and long road trips, ASU has put some of college hockey’s best teams to the test and looks to be headed in the right direction as it enters its final 12 games.

“We’re way better than our record,” head coach Greg Powers said. “I don’t have any doubt about it.”

The Sun Devils’ performances in close games explain why they find themselves sitting at 5-9-2. Arizona State has lost four games by a single goal, including two overtime defeats at Penn State and a crushing loss to Notre Dame at the buzzer.

While wins have been hard to come by, ASU’s ability to keep games within reach indicates that it is close to hitting its stride.

“I really believe our guys have played well in the last 12 games,” Powers said. “There’s a lot of good, positive signs moving forward.”

In addition to narrow losses, injuries to key players hurt the team tremendously during the first half of the season. Star forward and team captain Johnny Walker suffered a knee injury in the second game of the year and missed nearly two months of action. Walker provided an immediate spark once he returned, scoring seven points in four games and reviving a previously dormant ASU power-play unit.

Backup goaltender Cole Brady and dynamic forward Demetrios Koumontzis also missed significant time due to injury, but are on track to return soon, giving the Sun Devils a boost as they head into the final stretch of games.

“We know we’re deep and have a lot of guys that can contribute,” Powers said. “We’ve had some really key guys out so to produce the way that we have and all the good things we’ve been doing is really cool to see.”

With a healthy lineup and momentum on their side, ASU should look more like the team that won 23 games in 2019-20 than a 5-9-2 team with an outside shot at making the NCAA tournament. Although they have little margin for error, they boast the talent and commitment necessary to put together an impressive run.

“We’re still very confident with where we’re at right now,” junior defenseman Jarrod Gourley said. “We have no doubt in our minds that we can still be a successful team this year.”