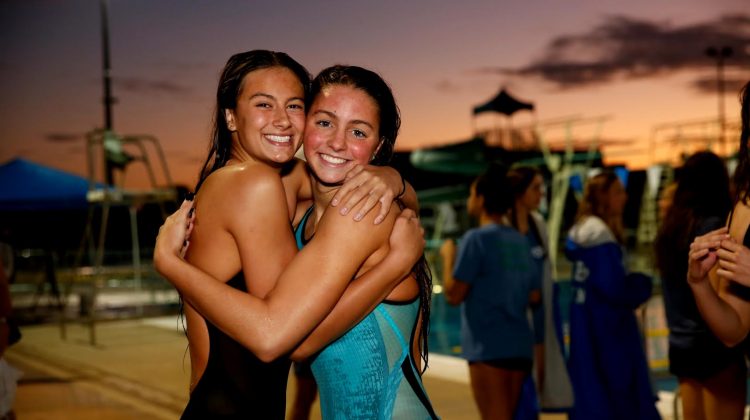 In a year that was full of unknowns, the Chaparral girls swim team ended the season on a high note, racking in their sixth straight state title.

Head coach Russell Krzyzanowski led the team to the title in his first season overseeing the team, after spending the previous six as an assistant.

He believes that this year’s senior class was special in a variety of ways, including how they won a national championship back during the 2018-19 season. The program has five members moving onto Division I programs next year.

Two of those student-athletes who will be at the same school are Morgan Brophy and Riley Courtney, who will be attending the University of Texas together in the fall and have both been named USA Swimming Scholastic All-Americans. They are a big reason for the Firebirds success over the last few years.

Speed in the water

Riley Courtney’s love for swimming started at a young age, before she could even remember. Her parents had her in the pool starting at two-years-old and she never looked back. Courtney also dipped her toes into gymnastics as well, but decided to stick with swimming in the long run. The move has paid off.

She came to Chaparral during her freshman year after previously attending a private school, and immediately loved the atmosphere surrounding the team. Her first group of friends were from the swim team and it made her feel like she was a part of something special.

“It’s been a really positive experience,” Courtney said of her time at Chaparral. “Freshman year all the way to senior year, I was always surrounded by the most passionate group of individuals. It’s very easy to swim fast when you’re surrounded by people that have the same goals as you and who want to see you succeed. I think that creates a positive environment.”

Courtney specializes primarily in breaststroke and IM, which is when a swimmer uses all four competitive strokes. She was a part of the 200-yard medley relay that won gold at the state championship this year with a time of 1:42:74.

“She’s an amazing breast stroker,” Krzyzanowski said. “Her initials are RC, so I’ve always called her an RC car because she just zooms in the water. She can turn up some good speed in a race. She’s been our relay girl on breaststroke.”

For Courtney, winning state wasn’t a sad moment, but rather an exciting time to reflect on who she got there with and how much she’s grown.

“I’ve been swimming with most of them since I was 10 and we’ve been in the same groups together moving up and swimming together and we kind of have a power relay that we’ve been a part of for the four years,” Courtney said. “It’s kind of eye opening that we’ve been together for 10 years and now we’re going to go our separate ways, but I think each person is right where they are supposed to be and everyone is going to be super happy and super successful.”

Similar to Courtney, Morgan Brophy was in the water from a very young age, with both of her parents being former swimmers.

Even at just a couple months old, her parents would have Brophy and her siblings in the water. She has been doing competitive swimming for almost 12 years, beginning since she was five-years-old.

Brophy lived in Las Vegas prior to moving to Arizona and had never really done high school swimming before starting at Chaparral, being mainly involved in her club team.

“I think it was pretty cool to be part of a high school team, where there’s such a strong team with the girls like Ashley Strouse, Greer Pattison, and Riley. They really made it fun to be on a team that was similar to our club team,” Brophy said. “I enjoy club swimming a lot because of how competitive it is, so having them made it pretty cool to compete.”

When it comes to racing, Brophy excels in the IM and fly. She only became a flyer a few years ago, but now it is one of her best strokes.

“I think that’s really helped me become pretty versatile,” Brophy said. “I’ve kind of changed my breaststroke a couple times over the years. I used to be a freestyler and a backstroker…because I have a background of the other strokes being my best I am able to put together a pretty good IM.”

Even though Brophy came to Chaparral’s program during her junior year, she made an immediate impact.

“Once she came to our program, I immediately knew the talent we had,” Krzyzanowski said. “She’s a special person in the fact that she’s a big time leader by example. She jumps in the pool and proves her craft. She’s always willing to get better.”

Headed for the Lone Star State

When it came to choosing what college they wanted to attend, Brophy and Courtney both had similar emotions when talking with the coaches at Texas.

The recruiting process began at the beginning of their junior years and they expressed how much of a hectic time it can be from phone calls to recruiting visits.

Prior to visiting Texas, Courtney had been having a rough few months, but when she got to the campus, she felt something that she hadn’t felt in a while.

“When I got to Texas I was the happiest I had been in quite some time,” Courtney said. “I was super happy and I wanted to feel like this for the next four years and so I think that excitement stayed with me for the next few months and I knew that’s where I wanted to be.”

Another one! Chaparral commits the 4th division 1 swimmer out of our 2021 women’s class with Riley Courtney committing to The University of Texas!

For Brophy, Texas was the first school she had talked to during her recruiting journey.

“I knew deep down that this was it because I loved the coaches so much and I knew that they had my best interest,” Brophy said. “I think I didn’t feel the way I did about them with any other coaches, where I felt like I was really wanted and I felt like they wanted to help me just as much as I wanted to come help their team.”

Congrats to Morgan Brophy on her verbal commitment to the University of Texas!

Krzyzanowski is excited to see what the next chapter will hold for both of his star seniors.

“It’s impressive to see them grow and realize there’s four more years,” Krzyzanowski said. “I think these two will capture the moment, but I think it will be awesome to see four years from now…who knows what these kids will do, but they will be glued together and they’ll be able to look back on it. It’s cool to see the ride.”

Brophy is still unsure what she wants to major in, but is interested in psychology, while Courtney is considering pediatric oncology. They are both eager to get on to campus in the fall.

“I’ve had this excitement since March so I’m excited for that to become my reality and live the things I’ve been falling asleep thinking about,” Courtney said. “I’m so excited to become part of an amazing group of people.”