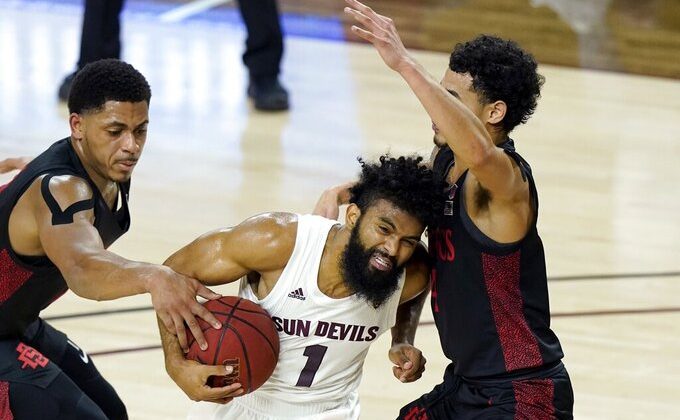 No. 24 San Diego State pulled away from No. 23 Arizona State on Thursday night, defeating the Sun Devils 80-68 at Desert Financial Arena.

The Aztecs used a strong start and second half scoring run to handle the Devils easily. SDSU pushed its lead to double-digits in the second half and never really looked back. Here are three takeaways from ASU’s second loss against a ranked opponent:

It’s going to sound like a broken record during the 2020-21 season, but ASU’s lack of size is, and likely will continue to hinder them. The loss of Romello White is big. ESPN’s Seth Greenberg reiterated that point on the Brad Cesmat Show earlier this week.

“We can’t have poor offense lead into transition defense and a lack of rebounding,” said head coach Bobby Hurley. “That might have been the case…There’s some where a seven-footer might go over and get one and you can live with it. But when you are getting out hustled on the baseline by someone that is more alert and more ready to go after the ball and you are standing around assuming something and they hit a three, that’s a problem. If we can’t find another gear and play harder, we aren’t going to have success against teams like San Diego State or Villanova or any really good teams.”

Jalen Graham and Chris Osten are solid players. Osten provides energy and does a lot of little things right on defense and fights for rebounds.

Graham has shown offensive flashes as well. But with all of that being said, they aren’t dominating inside presences. They don’t clear off the glass, and other teams are taking advantage. It was a problem against Villanova, and it was a problem again against SDSU.

If the Sun Devils don’t rebound and play consistent defense collectively, it could be a tough outlook come March.

“Guard U” works. It’s been proven. ASU’s guards are all highly skilled and talented, and their offense can carry them to out score teams. But if shots aren’t falling, the lack of rebounding and an inside presence will be tough to manage.

Preseason AP All-American Remy Martin has put up double-digit scoring efforts in all but two games this year. The two games where he hasn’t? San Diego State (9 points) and Villanova (5 points).

Martin’s proven he’s a big game player in recent years. It’s early. He’s got plenty of time to prove himself, but the performances against top-tier opponents haven’t been enough early on. That doesn’t mean hit the panic button, but Martin was just 2-8 against Villanova, and 2-8 again tonight.

He has to have more production to beat higher-level programs. ASU goes as he does. Hurley pointed that out, too.

“He kind of had a blank look on him and didn’t really have that fire and that energy that I have kind of been used to seeing from Remy,” said Hurley of Martin’s performance. “Overall, he has to play better in these games like this where he’s had a history of playing extremely well in these types of games.”

In the Bobby Hurley era, there have been nights where his free-flowing offense doesn’t look guardable. With transition offense and trust in his guards, it can be very fun to watch.

Then there’s nights like tonight, where the offense was stagnant and seemed out of sorts. Part of that credit goes to a very steady San Diego State defense, which held Hurley’s guards to 34.5 percent shooting. Some of the blame can also be contributed to shot selection and an inability to get in the paint off the dribble, specifically in the second half.

“Poor shot selection with quick shots, inexcusable turnovers, and then bad defense,” said Hurley of the offense. “I give credit to San Diego State because it felt like a really ugly game and it was difficult for anyone to get in an offensive rhythm. They emerged from that 15-minute mark in the second half and really outplayed us and were more physical and resilient.”

Josh Christopher fouled out early in the second half, Marcus Bagley was out, and Alonzo Verge returned for the first time in two weeks, but the lack of ball movement and ability to create easy shots was troubling.

ASU’s loss to SDSU wasn’t a back-breaker by any means. The Sun Devils have lost to two legitimate ranked opponents. But if the games against Villanova and SDSU have proved anything, the group is still a long way from where they need to be if a deep run in March is expected.