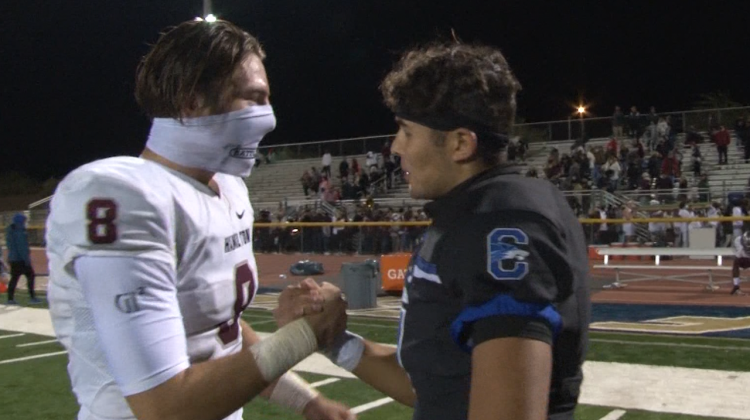 There are images you can expect after a championship football game.

The look of excitement and jubilation as a team raises a trophy. The look of disappointment from the team the scoreboard didn’t favor. Heartfelt moments between coaches and players. Media trying to chronicle each detail.

While there were plenty of these images after Chandler’s 23-21 Open Division win against rival Hamilton on Saturday night, this was anything but a regular championship in a regular season in a regular year.

The images that stick out in my mind from this postgame experience won’t necessarily be the big celebrations or trophy being raised, but little moments for individual players, quiet interactions off to the side of the celebratory mob.

These are the moments that I’ll remember after the 2020 Open Division championship.

He’s 23-0 as a starter, has ice water in his veins and has been an incredible ambassador for Chandler and Arizona leading this program the last two years. After the clock hit zero and the Wolves cemented their six state championship in seven years, Keene held off on the celebration with his teammates to show some respect to his opponents.

He eventually found his Husky counterpart Nicco Marchiol and the two hugged and shared congratulations and consolation with each other in a quiet moment. These are two members of what’s become a growing fraternity of the elite Arizona high school quarterback. More and more big-time college programs are being led by signal-callers from State 48, and these will follow that trend in the coming years. They both made some huge throws Saturday night, and the showing of mutual respect and admiration postgame will be a lasting one.

While most of the Wolves were congregating at midfield, Crew Peterman snuck off to revisit the 31-yard line, right hash facing the south end zone. About an hour prior, the Chandler kicker nailed a field goal from that spot to give the Wolves a 16-7 lead. Those three points were huge in the 23-21 final score and victory. He needed another chance to soak in that moment in his final high school game.

The overwhelming image I saw among coaches, players, media and parents in postgame is a sense of relief. Yes, those wearing black and blue were relieved the Wolves were able to come away with the victory, but it was more so the relief that a season happened and was completed.

That seemed like it was light years away in July and, at times during the season like it would dissipate into a never-ending loop of conditioning and Zoom meetings. Some areas of the state and individual programs weren’t so lucky. The Tolleson and Phoenix Union school districts saw their seasons gutted. Tucson started late and ended early. Saguaro had four regular season games affected by positive tests on opposing rosters before seeing their Open Division hopes end from the virus. I feel for every single one of those situations, and no, it’s not fair. To get a season and complete the majority of their games was an incredible accomplishment.

These students have had to go into a limbo that adds a new level of stress to the student-athlete experience, and Rick Garretson has been quick to credit his senior group with how they led before and during a pandemic. This is one of the most special classes to come out of Chandler, and they’ve accomplished feats few ever will on a high school football. Senior leadership is a big reason Chandler has rose to the gold standard of high school football in Arizona and across the nation, and this group helped elevate that already high bar.

Coaches often talk of adversity in the context of on the field, when an injury happens or a teammate is in need away from the field. Prior to March, 2020, “global pandemic” was almost assuredly not on that list. But every one of these senior groups that got to play in championship weekend led during some of the most adverse situations, and the high school community is thankful.

The 2020 season will be one none of us soon forget, and these images and moments in particular will be ones etched in my mind for a long, long time.

I asked Kyle if he'd Zoom in for a deep dive on his recent thread. He agreed. We taped 43 minutes, which will run unedited on the show this morning at 10:35a. Wide-open discussion #MentalHealthMatters https://t.co/et6U1SA8LK
View on Twitter
2
0