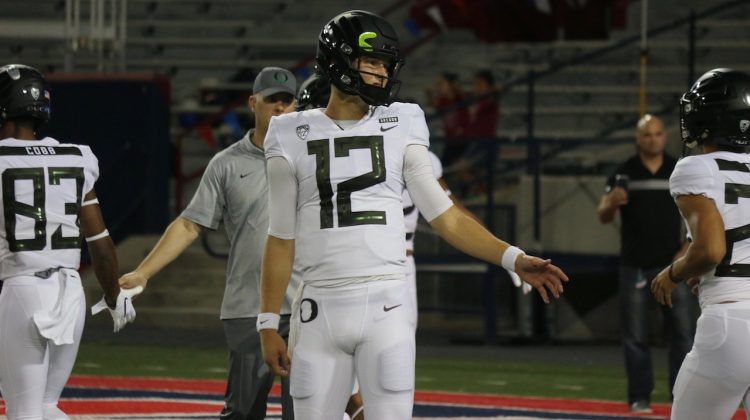 After Oregon handed USC its first loss of the season in last night’s Pac-12 Championship, the Ducks have secured an automatic bid to the Fiesta Bowl, where an opponent has yet to be determined.

There are plenty of intriguing local storylines around Oregon, including its starting quarterback. Hamilton’s Tyler Shough and former Chandler wide receiver Johnny Johnson return to the valley, with family allowed to attend the game.

Sports360AZ’s Jordan Spurgeon recently highlighted what it’s been like for the Shough family over the last month, with Tyler playing at Oregon and younger brother Brady playing for Hamilton and recently signing with Northern Arizona.

It will be a homecoming for the former Husky quarterback, as Oregon looks to cap off an anything but usual 2020 season on a high note.

Could there possibly be two Arizona quarterbacks playing in the bowl game as well? Although there aren’t too many experts projecting Oklahoma in the Fiesta Bowl, it’d be another storyline if Shough and Spencer Rattler were able to battle it out in a New Year’s Six bowl game.

Or, could Iowa State and Brock Purdy still sneak in despite the Cyclones loss in the Big 12 title game? Things to ponder as the rest of the college football weekend plays out.

With No. 6 Iowa State losing a close game, I believe they'll remain high enough to go to the New Year's Six. Likely vs. Oregon in Fiesta.

Other opponents in the hunt to play the Ducks are Northwestern, Florida, Georgia, Cincinnati, Indiana, Coastal Carolina, and Texas A&M. The bowl game is set for January 2, 2021 at State Farm Stadium in Glendale.