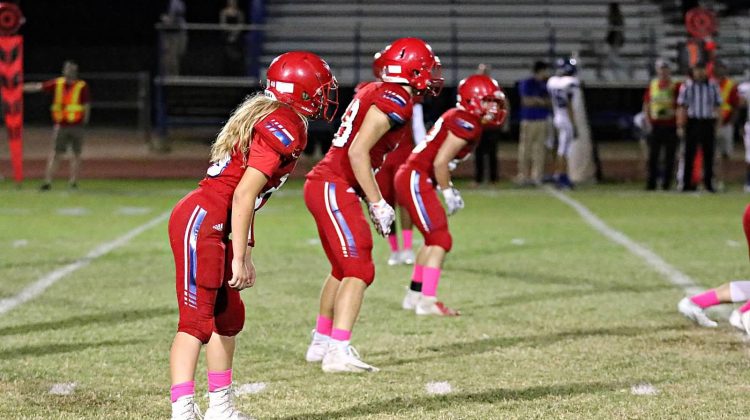 When most people go to a football game, they don’t expect to see a female playing on the field. However, that stereotype is changing, and senior linebacker Karstin Hollen is a part of that advancement in society.

For Hollen, football has always been in her life. Both of her brothers grew up playing on the gridiron, so she was always forced to go to their games. Eventually, it became something that she wanted to pursue around the time she was in fifth grade. Although she was indecisive about whether to try it or not.

Things changed for Hollen when middle school came. She went to Stapley Junior High, which is a feeder school into Mountain View Mesa High School, where she started off playing flag football, and then moved to tackle once she went to Mountain View.

“I was a little nervous just because I am a girl and I think at first the boys were really hesitant because I wasn’t a boy,” Hollen said. “They were really confused, and it was pretty nerve-wracking, but eventually they got to know me and I just became friends with them and then we became a family.”

Head coach Mike Fell had coached Hollen’s older brothers and was never hesitant when it came to bringing her on the team.

“I love her as a teammate,” Fell said. “She’s someone that’s really added to our program. It was good for my male athletes to be around a girl and see that she worked hard just like everybody else. She never asked for any favors or to get let out of anything and she was always just treated like a regular player.”

Hollen played all four years at Mountain View, being able to play at both the JV and varsity level. During her junior season, she recorded two tackles during the varsity season.

She was also able to share some of her special moments on the field with her brother as well. Her oldest brother graduated from Mountain View in 2015, but she was able to play with her second-oldest brother, who was a senior when she was a sophomore.

“It was a really cool experience and it’s really inspiring to me just because I looked up to him so much and being able to play right alongside him just gave me so much joy,” Hollen said.

I never thought I would be able say I got to play a varsity game with my big brother. 🏈👀 pic.twitter.com/5IZrRPO8d8

Hollen didn’t just leave an impact on the football field, though. She also left her mark on the mat. She started wrestling while in eighth grade and didn’t know if it was the right fit for her. Despite the doubt, she jumped back into it during her junior year and decided it was something that she wanted to grow and work at.

Hollen is excited that there is a girls division for wrestling. Last season, she came in fourth place in the state meet for the 145-pound weight class.

Being able to play football has helped with her transition to wrestling as a two-sport athlete.

“Football has taught me just how to work hard, so that definitely went to wrestling because wrestling is one of the hardest sports you can play and football just taught me how to have the mentality that I can do anything,” Hollen said. “When you’re in wrestling practice and it gets really hard, you just have to keep the same mentality.”

Fell also believes that football has helped Hollen off the field, and it’s turned her into a well-rounded athlete, whether it be in football or wrestling.

“I think what football did was that it made her more aggressive, and she’s pretty new to wrestling so I think that’s going to help her in wrestling and probably in college,” Fell said. “Football just kind of helped her out, learning how to get tougher and battling against the boys.”

Similar to Sarah Fuller and so many other strong female athletes who have stepped on the gridiron and are breaking down barriers and opening doors, Hollen is paving the way for future females in football for years to come and she believes nothing should stop those that want to try the sport, whatever obstacles stand in their way.

“You just have to be yourself and go after what you want,” Hollen said. “You can’t let anyone stand in the way of what you actually want to do in your life, and don’t let boys or any other people impact what you do because it’s your life.”