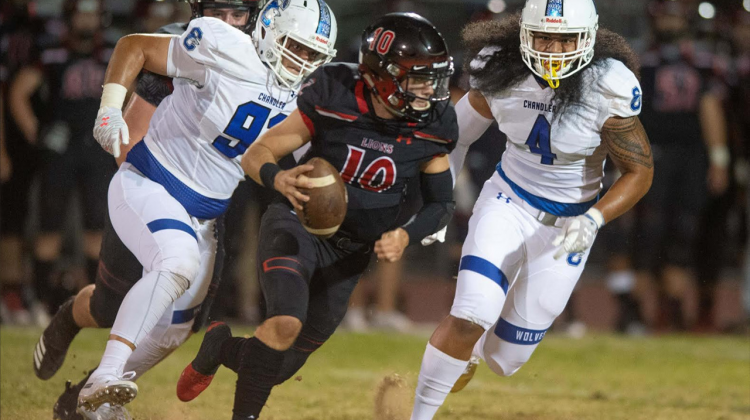 Every 5A and 6A semifinal will be housed in the West Valley as west side schools have retained the high seeds in those brackets including the number one seeds. In these brackets though, anyone can win on any given night.

The Liberty Lions celebrated their rematch victory against Centennial nearly as much as their 6A golden ball victory last year. Now the Lions face arguably the most difficult game in program history.

In the opening week of football, Liberty hosted Chandler for the first time. The Wolves dominated with a 44-10 victory. Kyion Grayes blew by the Lion defense, picking up the first four touchdowns of his season. While allowing 44 points is never great, Liberty joins Saguaro, Hamilton, Salpointe Catholic, Highland, and Centennial as the only Arizona teams to keep Chandler below 45 points in the past three seasons.

In that sense, one could say the defense did their job, slowing down CHS as much as possible. At the end of the day, Chandler is going to score. If Liberty wants any chance to take down the fifth-ranked team in the nation, they need more offensive production. Senior tight end, Sam Wolfer, was the only Lion to find the endzone in their first meeting and has emerged as a top option on offense, leading the team in touchdowns. Liberty will also need productivity from their sophomore running backs, Zaccheus Cooper and Zach Wallace who have combined for 13 TDs and over 1,300 total yards.

Even with that said, the main reason behind Chandler’s lack of points in their first meeting derived from a massive amount of CHS penalties in the first week of the season, something that no one should expect to see from Chandler in the playoffs. It will be a massive uphill battle for Liberty just to sniff victory against the fifth-best team in the nation.

Without a doubt, the biggest game in Boulder Creek football history is coming this Friday. For the first time in program history, the Boulder Creek Jaguars are in a conference semifinal.

Led by senior quarterback, Bear Milacek, and running back, Jacob Cisneros, BCHS held off Shadow Ridge to advance to their first semifinal game. Now they face a stout Highland team who beat Boulder Creek last year by 39 points behind four passing touchdowns and 156 pass yards from now-junior quarterback, Gage Dayley. In that game, Highland held Cisneros to just 48 rush yards but was able to pick up 54 receiving yards.

2020 has been a different story for Boulder Creek, though. Cisneros has evolved into one of the best backs in the state, earning 1,482 rush yards in just 10 games this season alongside another 644 receiving yards.

These two programs have only met twice in program history, coming in 2018 and 2019. The averaging margin of victory has been 45 points with both games in favor of Highland. If Boulder Creek wants to earn its first State Championship appearance, they’ll have to play the game of their lives and take down a team who many believed deserved to be in the Open Division Playoff.

🚨 TOUCHDOWN JAAAAGS!!!@AzQbBeAr6 hits @Jacob20Cisneros in the flat and Cis does the rest … 👀

It was at this point last year where heartbreak struck for second-year head coach, Joseph Ortiz, and the Cactus Cobras. With seconds remaining on the clock, the team scored a touchdown and decided to go for a game-winning two-point conversion against Mesquite, which was deemed no good, to the surprise of every Cobra on the field.

For the first time since the 2003-2005 seasons, Cactus is in back-to-back state semifinal games. In dominating fashion, Cactus defeated Coconino 41-7, behind junior, Aki Pulu, racking up a pair of touchdowns and a pair of interceptions, picking up one of each in a single play at one point. Cactus now travels 65 miles south to battle top-seeded Casa Grande in the first meeting between the two since 1988.

The Cobras are 8-0 against Casa Grande but to keep that streak going, they must tame CGHS junior quarterback, Angel Flores, who is responsible for 273 total yards per game and 28 touchdowns. Expectations rise for athletes such as junior, Justin Holmes, leading the team with 15 TFL and five sacks. Also, Andy Morales, Aki Pulu, Joseph Lagafuaina, and Polo Banuelos have all accumulated multiple interceptions this year and face a quarterback who has thrown five interceptions in 2020.

Holmes taking my phone for a lunch selfie. Special group of amazing kids! Proud to be their coach! #family #UnfinishedBusiness pic.twitter.com/t9msjfwSbv

Much like their fellow 6A counterparts, Boulder Creek, the Sandra Day O’Connor Eagles are entering their first program state semifinal game. And much like BCHS, Sandra Day is hosting one of the best teams in the state. Chaparral had their season delayed due to COVID-19 cases and in part led to a low ranking by the AIA algorithm.

SDO earned their bid into the state semifinals with overtime heroics from senior quarterback, Seth Felts, taking down Basha last week. Felts has been a threat through the air, throwing for over 1,000 yards, but has also totaled nearly 400 rush yards as well. Felts faces one of the toughest defenses he has ever seen. The Chaparral defense has totaled 13 sacks and six interceptions in just six games through their 2020 season.

O’Connor will also have to deal with a high-powered Chaparral offense with quarterback, Brayten Silbor, and rising tight end, Max Minor. Silbor is averaging an astounding 305 passing yards per game in a schedule that includes Liberty, Casteel, Centennial, and Queen Creek. The Eagles will look towards senior, Brandon Craddock, who has racked up 19 tackles for loss, and 3.5 sacks, as well as fellow junior, Jaden Jacobi, who has three interceptions. The Eagles face an uphill battle against a team ranked fifth in the state by MaxPreps and will need to play one of their best games in program history to make their first-ever state title game appearance.

Two massive and incredible upsets set the stage for a juggernaut of the east to march to the west side. Scottsdale’s Notre Dame Prep is looking for the golden ticket to reach their third state title game in the past four seasons. In their way stands Peoria Ironwood, eyeing their first state championship appearance since 2002.

The Eagles were down 27-7 in the third quarter at Desert Mountain and outscored DMHS 28-3 to close out the game. Next up brings Notre Dame Prep to town. Even though NDP is the seventh seed, they came in as one of the toughest teams in all of 5A. The Eagles must stop Notre Dame’s QB, Tyler Schweigert, who has airmailed over 1,100 pass yards. Look out for Ironwood’s own gunslinger of a quarterback, Will Haskell. The San Diego State commit has thrown for 1,641 yards and 19 touchdowns. Ironwood has been to three state title games but has yet to bring home a golden ball.

From our football family to yours, Happy Thanksgiving! pic.twitter.com/dduCLupaig

The number one seed in 5A pulled off a 35-14 victory against Verrado to open up the playoffs and now welcome the 2019 5A runner-ups, Campo Verde, to Peoria. CVHS is a threat to the top-seeded Mustangs with their dynamic duo of Caden and Connor Calloway. Two-way senior, Tommy Arnold, has been the heartbeat of Sunrise Mountain, earning over 1,000 total yards while racking up 28 tackles and a sack.

A pair of Mustangs performing on defense has been senior, Owen Thomas with ten sacks, and senior, Micah Scott, who has picked off quarterbacks three times in 2020. This is Sunrise Mountain’s second program semifinals appearance, the last coming as the top seed in 4A in 2017 where they fell to Salpointe Catholic.

A few pic’s for the WR group though out the year. This group has work really hard and earned the #1 seed in 5A. Still have 3 to go to get where we know we should be. Love my guys. 💯💯💯💯💯💯💯💯💯💯 pic.twitter.com/eCOrJmARmp

Twice is nice. NAU retained the Grand Canyon Trophy by defeating Southern Utah for the second time this season. https://t.co/ujp9InJhR6
View on Twitter
4
21