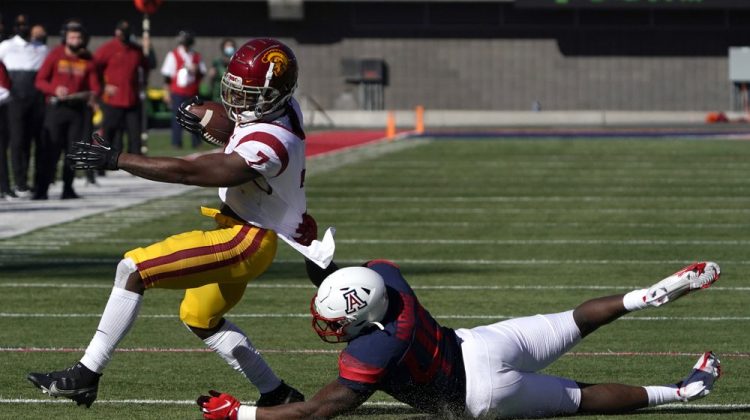 For the second straight week, No. 20 USC snatched victory from the jaws of defeat in the waning minutes against a school from Arizona.

Trailing twice in the fourth quarter, the Trojans mustered just enough to fend off the Arizona Wildcats in Tucson and avoid a second straight upset.

TOUCHDOWN TROJANS!@USC_FB calmly marches down the field and retakes the lead with 25 seconds remaining ✌️🔥 pic.twitter.com/rqMwqRNLtN

Arizona quarterback Grant Gunnell also had three touchdowns of his own, including a huge completion on a screen pass to wide receiver Stanley Berryhill to put the Wildcats ahead in the fourth quarter. Berryhill strutted into the end zone from a few yards out.

“It was definitely some disappointment that comes with a loss when you are that close and everyone is saying you are the underdog,” Gunnell said after the game. “But we already got rid of that disappointment and we are optimistic and driven right now. That’s a close game with the 20th-ranked team in the nation our first game of the year…We’re optimistic and we’re driven right now. We want to be great and win games here.”

Although the Berryhill touchdown looked like it might be the difference, Slovis managed to come back with 1:36 remaining and slam the door.

It came down to a game where whichever quarterback had the ball last would prevail. Although USC hasn’t shown dominance through its first two games, they still find themselves in the driver’s seat in the Pac-12 south through two weeks, burying both Arizona and Arizona State in heartbreaking fashion.

Gunnell would finish with 286 yards, while Slovis had 325 and a lone touchdown pass. Another bright spot for the Wildcat offense was running back Gary Brightwell, who finished with 112 yards rushing and averaged 5.3 yards per carry. Up next, Arizona heads to Seattle for its one and only crossover game against the Washington Huskies.

“You either win or lose, but I thought we had some guys that played who were experienced guys that we expected to play well, and we had some newcomers…that played well, but not well enough to win,” said Arizona head coach Kevin Sumlin.”That’s the bottom line. As I told them in the locker room, our effort was great, where it should be…In those kinds of games, it comes down to making plays and doing your job. We had a couple of breakdowns, but that can be fixed.”