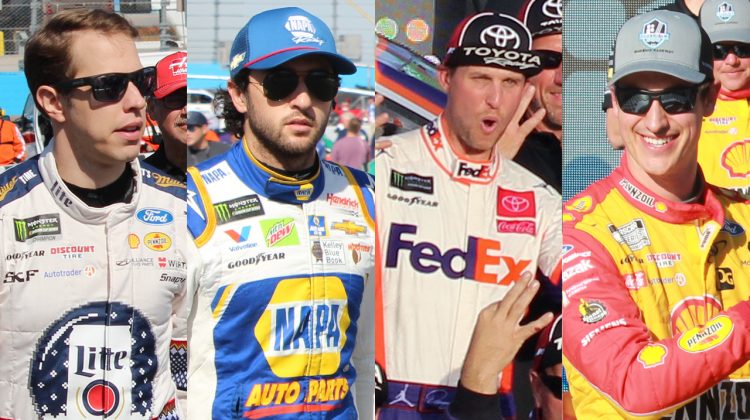 Just like in Disney Pixar’s movie, Cars, the top drivers go to a championship tiebreaking title race, whoever finishes the best of the drivers takes home the championship. The biggest difference? Every other car is on track racing for a win as well.

On November 8, Phoenix Raceway will host the 72nd Cup Series Championship where the Championship 4 are in a race inside the race, competing for the 2020 title. Regardless of if you are a race fan or not, here is your guide to the drivers racing to earn a championship on Sunday:

Brad Keselowski talks the talk and walks the walk. He hasn’t made many friends on the track but his aggressive driving style and success has earned him a plethora of fans.

Even with his 2012 Cup Series Championship (and tipsy post-race interview), arguably his most famous moment in NASCAR is at the driver intro’s at Bristol in 2010 proclaiming over the microphone, “Kyle Busch is an a**.” Keselowski’s personal foundation, the Brad Keselowski Foundation, supports organizations and individuals in order to help veterans and first responders during their road to recovery. He celebrates every victory by doing his burnouts with a large American flag hooked onto the car.

A second title for Keselowski would place him on a prestigious list of only 16 drivers to earn multiple career Cup Series championships since the series’ inception in 1949. Rarely does a team, even in NASCAR, win titles eight years apart. Keselowski has always been consistent and now that consistency could earn him another championship.

At just age 24, Elliott is already the defending back-to-back Most Popular Driver Award Winner and won the 2020 NASCAR All-Star Race. Just like when his father, Bill Elliott, raced in NASCAR, every time an Elliott wins, the Dawsonville Pool Room from his hometown rings a siren outside to signify the hometown kid’s victory.

Chase’s clutch win on Sunday at Martinsville locked him into the Championship 4. A championship for the youngster could mean the beginning of a new legend. Elliott at age 24 has already eclipsed the double-digit wins mark and has been successful for a couple of years already. Elliott has climbed up the racing ranks and now has the opportunity to become the third-youngest driver to win the Cup Series Championship.

Denny Hamlin has all but secured a seat in the NASCAR Hall of Fame. He has climbed into the top 20 all-time in Cup Series wins, he has won the Daytona 500 three times in his career and has done it all with just one team. The only thing he is missing is a championship, entering his name in the conversation of best to never win the title, coming so close on four different occasions. With seven wins this year, Hamlin is a favorite to finally earn the NASCAR Cup Series Championship.

A courtside season ticket holder of the Charlotte Hornets for many years, Hamlin will partner with Michael Jordan in NASCAR next year to create a new team with Bubba Wallace as the driver. Hamlin has raised over $2 million in funding for Cystic Fibrosis research with the Denny Hamlin Foundation.

While Hamlin’s best finish in this past Playoff round was just a ninth-place finish, he earned his spot over other drivers due to his bonus points from his seven victories in 2020. Grasping this elusive championship would mean validation. Hamlin has done everything in NASCAR but lift the Bill France Cup (which was just given its name this year, so I guess he’d be the first to do that as well). Hamlin is arguable already a Hall of Famer. A Championship could earn him a first-ballot HOF entry.

As Kyle Busch stated last month, “He’s nobody’s friend for a reason.” In his young career, he’s been punched in the face by Kyle Busch, told Kevin Harvick that his wife wears the pants in the Harvick household and turned into an ultimate villain, wrecking some of the fan favorites in NASCAR. But he always backs up whatever smack talk he gives on and off the track by ending up in victory lane.

After helping rebuild in Joplin, MO following the devastating tornado of 2011, The Joey Logano Foundation was formed and has invested $4,000,000.00 in various organizations to offer first and second chances for children and young adults during difficult times in their lives. Logano also owns and operates, Clutch Studios in North Carolina that hosts production shoots and other commercial needs.

Logano has been the most relaxed driver the past two weeks following his win at Kansas, locking him into the Championship 4. A second career title for the 30-year-old could lead to a new NASCAR all-time great. Logano is already tied for 31st all-time in career wins and analytics show that a NASCAR driver’s peak age is 39 years of age. Logano could win plenty more championships over the next nine years if he can pick up number two in 2020.

Who are you rooting for in the NASCAR Cup Series Championship? Join the conversation on social media and follow along during the weekend with @Sports360AZ and @devonhenry77.

To help us, @Team_FRM‘s 13-year Cup driver & Arizona native, @Mc_Driver takes us on a virtual ride along on @iRacing