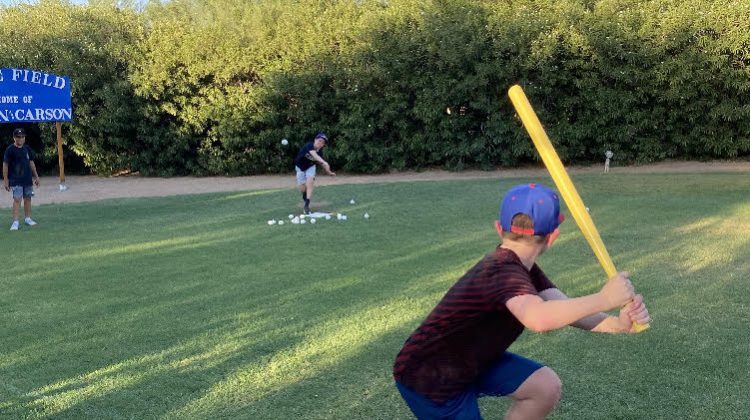 A backyard game for all ages is going big time. 14-year-old Logan Rose, with help from his father, is putting together a 32-team wiffle ball tournament that will take place at Scottsdale Stadium on Oct 24.

A year ago, Logan started playing wiffle ball games in his backyard with his 11-year-old brother Carson. During the COVID-19 pandemic, they turned it into a four-team league with some kids who were baseball players. Once their season ended, Logan wanted to take the next step.

“Our thoughts were always that our next step would be a tournament,” Logan said. “To take it to the next level.”

Logan went to his father, Jason Rose, to see what options they had on where to play the tournament. Jason loved the entrepreneurial spirit that his young son was showing.

“As a dad it was kind of cool,” Jason said. “Logan was asking about options, you know you can go to a city park to go that route, but I suggested to Logan go big or go home.”

Scottsdale Stadium in Tempe was brought up as an option and Logan “didn’t balk” as his father put it. Over the next two months they planned to put the tournament into motion. There was one big roadblock that they would need to overcome: the COVID-19 pandemic.

The governor has restricted gatherings to 50 people or less, but has given cities the ability to approve events that have strict guidelines and appliance of rules. An operational plan was submitted to the city and reviewed by the fire department, police department, operational department and the parks department.

“They say we don’t like that, change this, do something else.” Jason said. “And that took quite a while. It took about two weeks after trying to figure out everything at the stadium just to get the operational plan approved.”

Some of the guidelines that they got approved include: everyone not playing, eating or drinking must be wearing a mask, upon arrival attendees and staff will be surveyed for symptoms, and you must maintain six feet of distance from anyone that is not in your group.

Along with coming up with health and safety rules, Logan also needed to figure out how to efficiently play a 32-team tournament in one day.

They have designed the field so that seven games can go on at the same time. The games are 35 minutes or five-innings long, whichever comes first. To increase the pace of play, each batter starts off their at-bat with one ball and one strike. There is a set strike zone, so there is no arguing balls and strikes. They also erased the act of base running.

“In this, there are set singles, doubles, triples and home runs.” Jason said. “And what’s cool about this, is that you will be able to hit a home run over the fence of Scottsdale Stadium.”

The tournament is for all ages and allows for you to pitch as fast as you want. This has opened up the door for a wider range of competition. One of the teams that signed up first includes Chuck Hensley, former San Francisco Giants pitcher and wiffle ball Hall of Famer.

Hensley, 61, comes into the tournament with a lot of wiffle ball experience. The past two years he has traveled to California to play a wiffle ball tournament and has won both years.

Back in 2004, Hensley and his team went to Cedar Park, Texas to compete in the Wiffle Ball World Series. His team came in first place and he was named MVP of the tournament. Hensley would later be inducted into the wiffle ball Hall of Fame by Fast Plastic.

“It’s turned into more than just like a backyard kid’s game,” Hensley said. “And the fun thing about wiffle ball, for me, is that everyone growing up is pretty good at wiffle ball. For me, it’s just been something I have done my whole life since I was like six years old.”

The Western Wiffle Ball Classic on Oct. 24 starts at nine o’clock in the morning, and goes until about six. It costs $100 per team, and $5 per attendee. There will also be a day-long home run derby going on that will cost $5.

To register or find out more about the Western Wiffle Ball Classic you can go to littleleaguewiffleball.com. You can also check out their Youtube page, Little League Wiffle Ball, that Logan has put together and taught himself how to edit and produce.