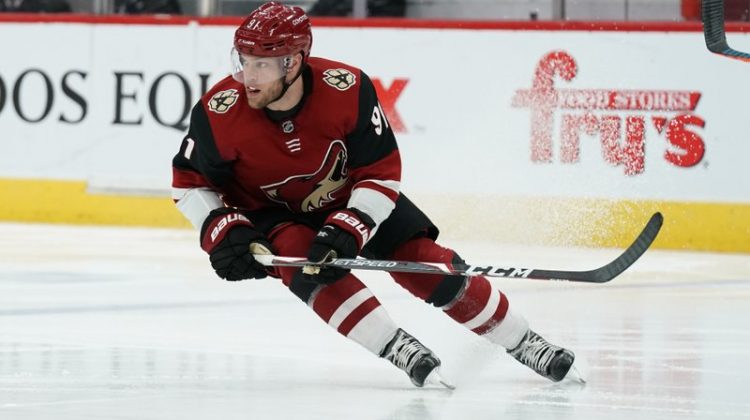 It wasn’t likely that star free agent forward Taylor Hall would re-sign with the Coyotes this offseason, and it’s now official. Hall  signed a one-year, $8 million deal with the Buffalo Sabres, according to Pierre Lebrun of The Athletic.

Earlier this week, General Manager Bill Armstrong stated that the organization had no intent on re-signing Hall with the Coyotes, and it was a mutual break-up.

“I had a conversation with his agent and I basically said to him that we wish Taylor the best,” Armstrong said. “It’s a mutual parting between two parties, where at this point in time, it wouldn’t be a good fit for the Coyotes and the direction that we’re moving. I think his agent was always aware of that. I don’t think there was any special message other than that we like him, we think he’s a good person, we thank him for his time here, and we’ve kind of moved on.”

There’s a variety of factors leading to Hall’s decision to sign with Buffalo, including a reunion with Sabres head coach Ralph Krueger. While playing with the Edmonton Oilers, Krueger was an assistant, and later a head coach when Hall was playing there.

Additionally, in a tough free agency market where many teams have been financially affected by the pandemic, Hall gets a hefty return for a just one-year contract. The Sabres, while they have struggled in recent seasons, have many talented young pieces to work with, including winger Jeff Skinner and center Jack Eichel.

Let's get this guy in some royal blue 👊@hallsy09 | #LetsGoBuffalo pic.twitter.com/5Uxous9H9L

Eichel, a 70+ point-scorer in each of the last two years, has the franchise tag on him and is one of the top talents in all of the National Hockey League. Thus, with Hall coming over on a one-year deal while many things are uncertain this offseason, the 2020-21 season will likely be a chance for him to showcase himself and prove his worth once again.

Hall stated that his main priority in free agency was winning, and although Buffalo hasn’t been to the postseason since the 2010-11 season (the longest drought in the NHL at the moment), Hall could play a big factor with trying to get over the hump.

As for the Coyotes side, Hall simply didn’t fit into the picture going into this season. With Armstrong inheriting the situation and the salary cap of $81.5 million remaining flat, there are many other holes to try and plug rather than re-signing a star free agent.

Part of those gaps includes making a team that is more physically imposing in their bottom nine forwards, which Armstrong has done thus far in the free agency period. Just this weekend, he signed John Hayden, Tyler Pitlick, and Johan Larsson – all strong power forwards that will likely make an impact on the bottom half of the roster sheet, looking to make the Coyotes a more well-rounded, physical team.

With Hall, the asking price and the state of the team at the current moment was simply going to be too much when the organization had many other priorities in mind.

“We weren’t adding $6 million players. We were adding small pieces to the puzzle that the team needed to be, like I’ve talked about, a little bit more prickly,” Armstrong said after his free agent signings on Friday. “…Free agency, I think some teams that win the free agent day, I say lose three years from now. They spend a lot of money and get locked in and then the next thing you know they have to sell the player off or give a first-rounder away. Sometimes you can get carried away and I think you just have to make sure that you aren’t chasing every free agent.”