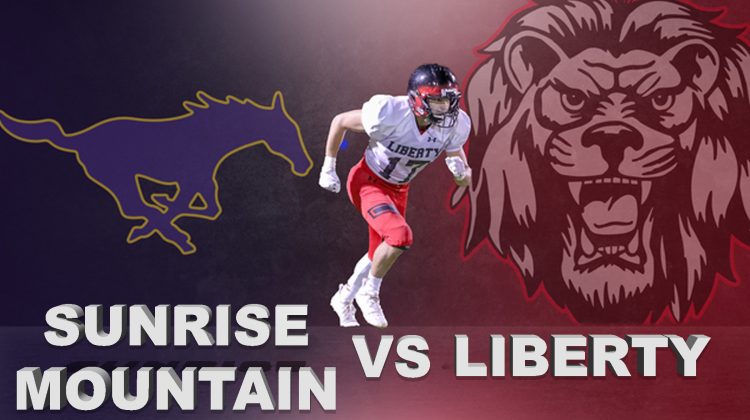 Sunrise Mountain was able to take advantage of Liberty’s mistakes as they completed the rivalry comeback win late in the fourth quarter, 37-33, Friday night.

In their ninth all-time meeting, it was Liberty that jumped out to an early lead. On the second play of the game, Lions quarterback Brock Mast found Cailin Knapp for a 77-yard touchdown. They controlled the game and held the lead for the entire first half.

In the third and fourth quarter, it was a different story. It was a back-and-forth offensive battle. The lead changed five times in the second half.

Trailing 33-30 with 3:30 left in the game and the ball at the Lion’s five, Sunrise gave the ball to their running back Tommy Arnold, who bulldozed his way into the end zone. It was Arnold’s second rushing touchdown of the night.

The Lions got the ball back down 37-33 with a chance to win the game on their home field. The Mustang defense stepped up, though. They got to the Lions quarterback, Mast, for a strip-sack and Andrew Berglund jumped on the ball for the Mustangs. It was Mast’s second turnover of the night.

The Mustangs took over with less than two minutes left, and at Liberty’s 39-yard line. After three run plays from Sunrise with no real gain, Liberty was able to use their three timeouts to stop the clock at 1:34. Sunrise had a fourth and seven and had a decision to make.

They decided to go for it and transfer quarterback Travis Ward ran a play-action play to find Ezekiel Marshall open for the first down. He was finally tackled at the Lions three.

The Mustangs went into victory formation and sealed their come from behind effort. They were able to turn the game around by capitalizing on some major errors by the Lions.

The Lions turned the ball over three times in the game, two of them resulting in Mustang touchdowns. On the first possession of the third quarter, Liberty’s Knapp muffed a punt and the Mustangs recovered deep in Lion territory. The other turnover came on the final play of the third quarter. Mast dropped back for a pass and it was intercepted by Micah Scott, who took it back 43-yards and scored a touchdown.

Pick-6 alert!! Micah Scott returns the interception 43-yards and the Mustangs are back in front. It is a back and forth battle as the third quarter ends. @LibertyFBLions 26 – @SunriseMustangs 30 3Q – 0:00#FridayNight360AZ

Another momentum swinging mistake that the Lions made was in the third quarter after they scored a touchdown to extend the lead. On the pursuing kickoff, they kicked it out of bounds, which meant they had to kick it again. The second time they kicked it to Brandon Bogard who took it 86-yards to the house. It gave the Mustangs their first lead of the night.

This victory for the Mustangs was their first victory over Liberty since 2017. It also increases their record to 3-0. Meanwhile, for the defending 6A champs, they drop to 1-2 on the season.

Next week Sunrise Mountain will travel to Goodyear to take on Millenium. Liberty will also be on the road next week as they take on Queen Creek. Sunrise looks to continue their undefeated season and Liberty looks to bounce back and get back to .500.