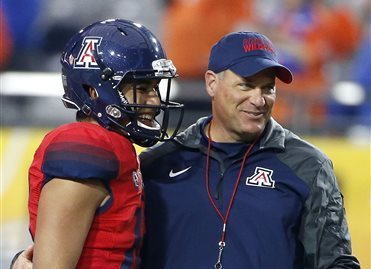 Rich Rodriguez, the former head coach at the University of Arizona, has traded in playbooks for podcasts. He and his daughter recently launched a new show called the Hard Edge Football Podcast.

“She spent a year working at a local station here as a producer for a live 4 p.m. show,” Rodriguez recently said on The Brad Cesmat show. “Here she is, 24-years-old, producing a show and it was a great experience for her. That was mainly news and she wants to do sports so I said I got a little bit of time and you can handle the technological stuff. I got a lot of stories to tell and well-known coaches I could bring on and we’ll have fun for an hour a week.”

The podcast doesn’t focus on the typical game recaps. It is going to be on the edgier side of things, and is a space where Rodriguez can go on some in-depth discussions.

Excited to launch my @HardEdgeFB Podcast. Gonna talk all things football with @raquelrod_23 and a special guest each week. Find it on Apple Podcasts and Spotify through the link below. https://t.co/eIOl20i0tF

As a former coach at Ole Miss last season, Rodriguez went on a rant on The Brad Cesmat Show about what the defense looked like in the SEC over the weekend. He attributes the struggles of the conference defensively back to one thing.

“I think the single most overlooked factor in sports and football is conditioning,” Rodriguez said. “These kids weren’t able to condition over the summer like normal and you watch these games and what is so strikingly obvious is that the fundamentals are horrible. People can’t get off blocks, they can’t tackle and that’s due to lack of mental and physical conditioning.”

As a coach that has been involved in both the SEC and Pac-12, Rodriguez knows what the difference between the two leagues are.

“The SEC does not apologize to do whatever it takes to have success in football, within the rules,” Rodriguez said. “They don’t care if you are going to build a $10 million dollar locker room, is this water polo team going to care? They don’t care. They have to win in football.”

The SEC was one of the conferences that didn’t delay the start of the season. Rodriguez gave his opinion on how he thought the Pac-12 handled the situation.

“No one really knew what was going on, so you can’t really criticize the decision to delay it but I would’ve waited. There’s no reason to postpone it when they did because they were going to get new information every day, not just every week,” Rodriguez said. “I think they could’ve started earlier and I still wonder why they didn’t.”

Rodriguez’s son currently plays on Arizona’s football team this season, and as the coach from 2012-2017, some of the older guys on the team were part of his squad when he was there. Rodriguez shed light on some of the happenings back at his old stomping grounds.

“I think they still have some upper class talent, but there’s a lot of questions in missing spring practice and missing summer workouts,” he said. “I think that makes an impact on a lot of them, especially U of A where they’ve can’t have injuries. They have to have guys play at a high level and they’re going to play good competition.”

As for his future in coaching, Rodriguez is ready if the opportunity arises, but is also enjoying his new role in ‘the media world’ with his family.

“I like to think over my 30-some years, I learned a lot every year and I have,” Rodriguez said. “I like to think I’m a lot smarter and better than I was a year ago or 10 years ago. If I get another shot at it, I have a good plan and great staff ready to go, but if not we’ll join the media world.”