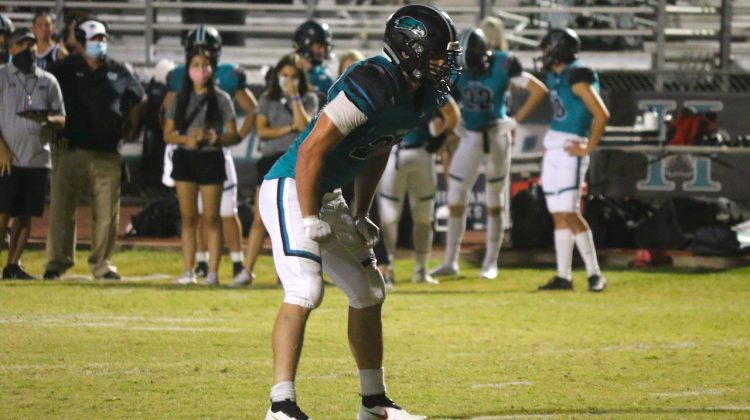 I had a busy night hitting a couple games in the Southeast Valley on Friday. It was a night of statement performances and a rivalry being built. There were plenty of interesting recruiting storylines sprinkled throughout the Highland – O’Connor and Casteel – Queen Creek matchups:

I got to catch up with the Highland safety earlier this week (full interview will be published in the coming days) and was impressed with his mindset and work ethic. He likened his training during the stay-at-home spring to a full-time job, eating eight meals to fuel a 25 pound bulk up and multiple workouts a day to maintain his speed. On the field on Friday, Allen and the Hawks flew around. The O’Connor passing game was trying to get the ball out quickly due to Highland’s strong front seven, the secondary were quick to supply some big hits. Allen also found the end zone as a running back.

Another week, another running back making plays who may be under the radar on the recruiting landscape. I’ve been able to see Hamilton’s Noah Schmidt, Boulder Creek’s Jacob Cisneros and now Highland’s Max Davis put up big performances in person early on this season. While this 2021 Arizona high school recruiting class may not have the ultra-elite sure-fire five-star running back prospect like Bijan Robinson, there are some DUDES at this position that have flown under the radar on the recruiting front. Schmidt showed a straight-forward style that can pick up chunks of yards at a time. Cisneros impacts the game in so many different ways and bounces off defenders. My first look at Davis showed that he’s a mix of strong and slippery. Defenders couldn’t seem to land a solid hit on him, and he racked up yards and touchdowns in bunches so far this season.

Seems like there are plenty of Arizona guys in the backfield that could help out at the next level.

Teams trade turnovers and then @MaxDavis27 takes it 61 yards for his second TD of the night. 14-0 Highland #FridayNight360AZ pic.twitter.com/GXXEl3ei7b

I didn’t get to catch much of Casteel – Queen Creek, but it was a passionate, rivalry-making games. A lot of these players grew up together. Some players transferred from one school to another, and both programs are hitting their stride at the same time. The 12-7 Colts win came down to the last play, and both teams seemingly have their eyes on the Open.

Casteel quarterback Dane Christensen, who currently holds an offer from Drake, made some key throws late to help eat up clock. The thing that jumped out to me was that he didn’t try to do too much. With a secondary that features Krew Jackson (Kansas State commit) and Hunter Barth (Cal pledge), Queen Creek would certainly try to bait Christensen to be overly-ambitious, but he made the plays that were in front of him and converted some key 3rd downs. He also didn’t get flustered when the Bulldogs brought pressure.

There are plenty of players who saw their recruitments get affected with no offseason showcases or camps, and I think Dane is certainly one of them. But he’s making big plays in big moments for the undefeated Colts, and that can only help him and his film.

Bobby Newcombe has helped build Casteel into a sustainable big school competitor. Isaiah Newcombe has been a two-way star and made his pledge to UCLA this offseason. So that means there’s some major pressure for freshman defensive back Jeremiah Newcombe, right? If there is, he didn’t show it. The younger Newcombe had two interceptions, one of which came on the final play to seal the victory.

Speaking of family affairs, it’s pretty cool to see brothers Trey and Porter Reynolds line up together on the defense for Queen Creek. Trey is already committed to Utah, and Porter (class of 2023) holds offers from Washington State and Colorado. There will be big hits delivered by a Reynolds thumper for a long time.