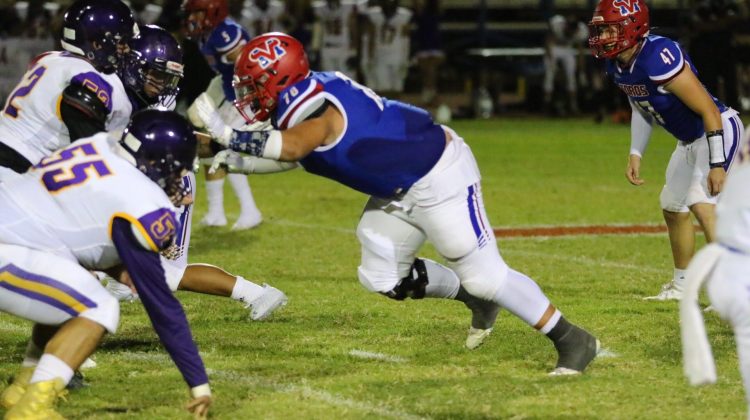 Following a 16-13 win over Mesa rival Red Mountain, Mountain View is soaring atop the 6A Central division with a record of 3-0 prior to playing a conference game.

After a strong performance led by their defense, Mountain View head coach Mike Fell was named the Arizona Cardinals’ Coach of the Week. He gives the credit to his players and coaching staff.

“We controlled the line of scrimmage,” Fell said. “Our defense did a nice job keeping them out of the end zone after being put into tough spots in the red zone and our coaching staff crushed the play calling.”

Now in his fifth season coaching the Toros, Fell feels the connection among his coaching staff is better than ever before, which will help the program sustain success.

“We’ve been patient while we’ve been building the past few years,” Fell said. “We’re kind of in a groove and it’s really fun right now.”

“The seniors have been good all the way through,” Fell said. “They were undefeated on JV in 2018 and they got some playing time with us last year.”

The culture of Mountain View stems from the attitude and confidence its players built over the past few seasons. Fell credits that to his other coaches, including freshmen head coach Billy Roberts.

One motto this group lives by is “pummalation”, meaning their goal is to pummel their opponent each week. Fell said that word stems from the programs’ philosophy to take things one game at a time and not get ahead of themselves.

This week, the Toros will open up conference play against Desert Vista (0-3). Despite the Thunder being winless, Fell is telling his team not to come out flat.

“We’ve seen them on film and we see they are good athletes,” Fell said. “I like the way our guys have responded this week and we’re in a good position with great intensity heading into Friday.”

The Toros were the cream of the crop during the ‘70s, ‘80s, ‘90s and early 2000s, winning eight state championships at the highest level. They haven’t won a state title since 2002.

“We don’t think about the program’s history when going about our games,” Fell said. “All we can do is get better everyday and be tenacious no matter who we face.”

As one of eight undefeated teams in 6A through three weeks, the Toros are ready to live up to their own expectations. Fell knows his team is willing to improve on their weaknesses, despite the early success they’ve had.

“We’ve done a better job of running the football this year,” Fell said. “One of the things we can do better is create more turnovers on defense. If we consistently win the turnover battle then we will be a great team in the state of Arizona.”