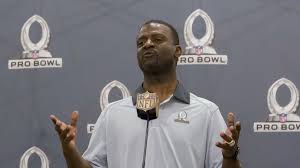 Hanks, a four-time Pro Bowl safety and Super Bowl Champion with the San Francisco 49ers as a player, was a former colleague of Anderson as a Vice President of Football Operations and Compliance in the National Football League for nearly a decade.

Now reunited, Hanks will be in charge of football operations, and he was appointed to his position on Aug. 20. He will also be a point of contact for all Pac-12 athletic directors when it comes to football.

“We worked side-by-side at the NFL in football operations. I am proud to tell you that Merton was my deputy and my right hand person there,” said Anderson while introducing Hanks. “…Merton brings instant credibility to the position and it’s as important as anything because the coaches, the assistant coaches, and the folks who have been in the trenches understand and appreciate where Merton has been.”

The Pac-12, which has had officiating issues in the past, is looking to continue strengthening its image and credibility nationally. Anderson helped resolve the conference’s officiating scandal last summer, and he believes Hanks can add expertise to the 12 teams and their overall experience on and off the football field.

Along with his NFL experience, Hanks recently worked as the Senior Associate Commissioner of Conference USA, where he was in charge of officiating, scheduling, and player safety.

In a COVID-19 world, there’s no doubt that there are going to be many challenges that lie ahead for the conference and playing football in the near future. Anderson and Hanks are looking to combat those issues, including officiating, College Football Playoff chances, and most importantly, recruiting strength within the conference. Hanks noted trying to make a metaphorical “picket fence” anywhere west of the Mississippi River to establish Pac-12 recruiting territory.

“The challenge for us as a conference, and I’m open to saying it, I’m not big on the Alabama’s and folks from other conferences coming to Tempe, Phoenix, Southern California, Texas, Northern California, Colorado, and quite frankly, take talent,” Hanks said. “Any way that we can help our individual schools with the recruiting piece, I think that’s going to be big for us moving forward.”

Overall, Hanks will look to improve the Pac-12 and its operations while trying to uphold the strength of the Pac within the power-five conferences of college football. Working alongside Anderson, Hanks feels at home and they can grow off their past achievements working together in the NFL.

“We are the Pac-12 Conference. We are a great conference with great student-athletes, great coaches, and great administrators, and quite frankly, I wouldn’t have come to this situation if I didn’t believe that were the case,” Hanks said. “I’m old enough to want to work with people who I know are exemplary, and not to put my good friend on the spot (Anderson), but one of the reasons I came was because I had the opportunity to work with Ray Anderson and Jean Boyd, and all the great people at Arizona State. I know the fiber that they have and you want to spend your time fighting with people like that.”