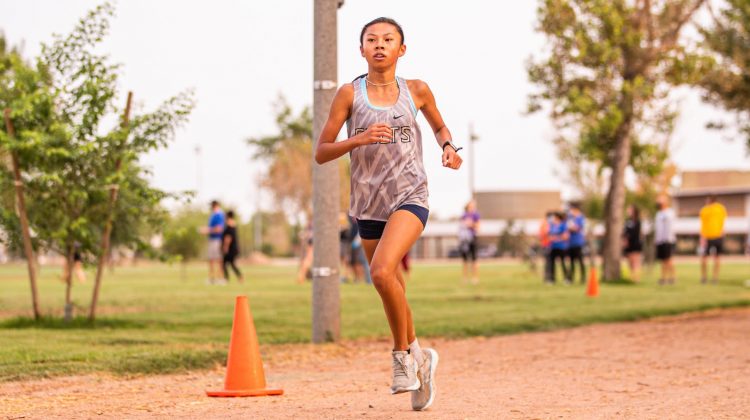 The competition is just getting started for three talented cross-country athletes in the Chandler School District. Kyah Zurek, Sara Jones and Sophia Noriega are all freshmen at different schools and are going to be competing against each other for the next four years. They are already getting a taste of what that is going to look like.

In early September, the three runners participated in the Chandler Invitational, where they competed in different races, but had times that were within seconds of each other.

The Soccer And Cross-country Star

Zurek, who attends Casteel High School, began running in first grade because her school had a running club. It was initially a small memento that drew her interest in the sport.

“I just continued with it up until now,” Zurek said. “I got into it because you used to get these little cleat charms for completing each five miles and I used to get really jealous and I wanted some really badly, so I joined.”

“Kyah is tiny, but mighty and she is a fierce competitor. Not only does she do cross-country for us, but she’s really good at soccer. She works that multi-athlete role for our school,” Lemieux said. “She’s someone who is super dedicated to whatever she’s doing and is an extremely hard worker.”

Despite the talent that she has in the sport of cross-country, Zurek’s main goal is to pursue soccer in college. However, running cross-country has allowed her to get better as a player on the soccer field.

“It definitely helps me stay in shape, especially during quarantine because I am doing all of these workouts,” Zurek said. “I feel like I’ve got ahead of some people because they haven’t been working out and running as much. Ultimately, it helps me be a better player and a better person.”

Zurek and Noriega, who goes to Chandler High School, competed in middle school against each other and Lemieux is excited to continue watching them race against one another in the years ahead.

“They’re all mega talented,” Lemieux said. “I remember over the last couple years watching Kyah and Sophia battle and every race was kind of back and forth. As we go to high school, we added another girl in the mix and I’m really excited to see what they can do.”

Noriega also began her cross-country journey in elementary school through the running club and joined because she enjoys new people, and has fun running. She is adjusting to the transition from middle school to high school, while embracing the challenges.

“Physically, the mileage has increased. I didn’t earn a ton of mileage in middle school, but I’ve enjoyed it so far,” Noriega said. “This summer I started late so there definitely was a catch up period so I’m just learning how to practice with the team and the longer mileage.”

Her coach, Matt Lincoln, says there is a special drive in Noriega.

“She’s super competitive,” Lincoln said. “So far it’s been more trying to hold her back and keep the reins on her for that. Some kids, it’s about trying to motivate them and push them. With her it’s the other way around. That internal drive is there with her, so it’s nice because you can’t really coach that sometimes.”

Lincoln is excited to see what the next couple years have in store for all three runners. Noriega would like to pursue cross-country at the collegiate level, but is just having fun in the moment for now.

“I’m sure it’ll be a good healthy rivalry over the next four years where they will look at each other’s times and it’ll help push them to get better as they go through,” Lincoln said. “It will be fun to see them develop running against each other. It’s definitely going to make our city championships very competitive.”

The New Girl In The Race

Jones is new to the area and is running at Perry High School. She moved to Arizona from South Dakota and noted that the coaching she’s received has been a lot better than the past, and feels that she is getting pushed to become a better runner in her new home.

Jones knows the mental component that is involved when it comes to running against people and the times are close. She’s striving to find her pace everyday.

“It’s really hard when you’re in a situation where you’re right next to each other and you’re all seconds apart,” Jones said. “It really just comes down to who has trained the most and working the hardest so you just have to tell yourself, ‘I’ve been working for this and I need to get better.’”

Coach Bryan Idleman at Perry High School knows that for Jones, the sky’s the limit this season and in the future.

“When she came in, I thought she was going to be back with our number four runner, but lately she’s stayed up at the front. I think it’s going to help her tremendously and I’m really excited about what the future holds because I think she’s got it,” Idleman said. “She has a lot of potential to do some damage during the next four years.”

Jones is excited to have this type of competition over the next four years. The three girls have yet to compete in a head-to-head race so far, but when it does happen, it will definitely be a sight to see among some of the top cross-country athletes in the Chandler district.

“It’s exciting getting to race with the same people but also pushing yourself throughout your races,” Jones said. “Having girls right there by you in a race is good for helping yourself get better.”