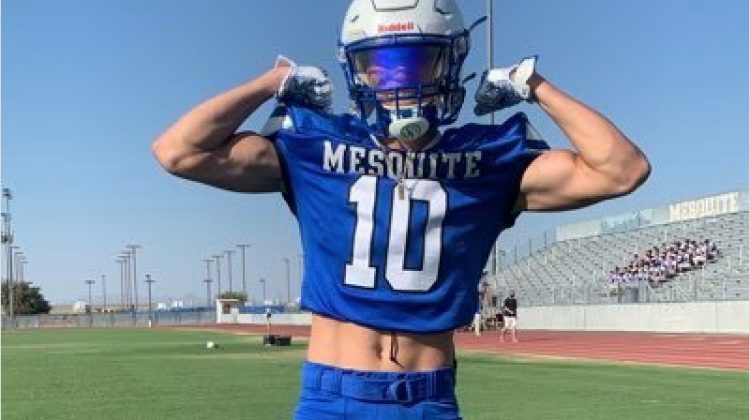 “It’s an honor,” Lira said in his Zoom award presentation. “Like out of the whole state, you guys chose me. It’s crazy.”

@ericlira01 was picked as the Player of the Week by both @AZCardinals and @azcentral after his 5 TD performance against ALA-QC. Thank you for voting on the @azcentral site. Love the support our Wildcats get day in and day out. pic.twitter.com/btI5XiTQN3

Lira impacted his game last Friday on both sides of the ball. He caught six passes for 217 yards, taking four of his completions for touchdowns. On the defensive side, he also had a 70-yard interception return for a touchdown. Lira’s five total touchdowns helped lead Mesquite to a 60-42 victory over American Leadership Academy Queen Creek.

“We went into this game knowing it was going to be a battle,” Lira said. “But I knew I had Ty (Thompson) throwing me the ball, so I just had to get open and he was going to throw it to me, and I was going to catch it and score.”

This is Lira’s first season at Mesquite. The senior transferred from Central High School once they announced that they were not having a football season because of COVID-19.

Last night, Lira looked to put up more impressive numbers in their game against Seton Catholic. In a dominating 50-8 victory for the Wildcats, it was more of a group effort. Four different players caught a touchdown pass.

Lira had a more quiet night than the week before, but still made his presence felt. He caught three passes for 56 yards. He did his part on defense too, helping hold the Sentinels to just eight points for the game.

Mesquite improves to 3-1 on the season, with their only loss coming against Sunrise Mountain in a 46-40 shootout. Next week, Mesquite returns home to face Gilbert in a non-section matchup Friday night.