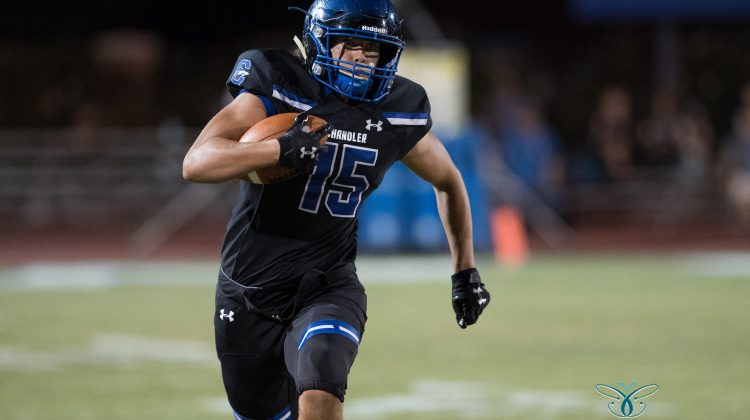 For Chandler High School football player Eli Swope, life is about continual progress and growth in the classroom, on the field, and in his everyday approach.

“I strive to be the best version of myself everyday, in everything that I do,” Swope said.

Swope is family-oriented and driven to make them proud. His father, Troy Swope, is his workout partner in the offseason, and the man he looks up to as a role model.

Troy Swope co-founded Footprint, which is a company that helps reduce the use of plastic by creating alternatives. Swope is eager to learn about how the company works and even sits in on some of his dad’s work meetings.

“Eli is always curious about the company and my process for solving big problems,” Troy Swope said. “His curiosity is going to lead him far in life as he follows his dreams.”

One dream is to create a giant sports complex and training facility in Arizona, similar to the ESPN Wide World of Sports Complex in Orlando, Florida, which was used for the NBA Bubble this year.

“I had the chance to play there in eighth grade for a national championship and it was one of the coolest places I ever could’ve imagined,” Swope said. “I hope to be able to recreate that someday here in Arizona, because the infrastructure is there.”

Swope committed to play football at the University of San Diego on October 5 after mulling offers from a few other schools. Prior to his decision, Swope said he wanted to find a school that fits him academically and sets him up for life.

He doesn’t know what he wants to major in yet, but business and engineering have crossed his mind. His high school GPA is 4.33.

On the field, Swope made the transition from offensive line and linebacker to tight end prior to the 2019 season. He made the switch because he wanted to fill a hole on the roster to help his team win.

Heading into his senior season, which started Friday, October 2 with a win against Liberty, Swope looked to be a more productive tight end in the passing game.

“I want to be more comfortable running routes and learning the offense,” Swope said. “I’ve been working consistently with our receivers coach to better develop my route tree.”

As one of the captains of the offense, Swope is a role model for the younger athletes. Chandler head coach Rick Garretson feels fortunate to have him in the program passing the torch to the next generation of Wolves’ talent.

“He’s a quality kid who exemplifies everything you want in a program like Chandler,” Garretson said. “There’s nothing negative about him, he’s tenacious.”

Swope said he’s not the most vocal leader, but he puts his nose in the dirt and leads by example.

One example of this leadership is in the weight room. While he hasn’t tested an official one rep max since 2019, Swope believes that his current squat max is over 550 pounds and his bench is over 25 reps at 225 pounds. He’s listed as six-feet-two inches and 225 pounds.

Long-time friend and current Chandler quarterback Mikey Keene knows greatness lies within Swope because of his work-ethic and hunger. When the COVID-19 quarantine first started, Swope, Keene and others were working out daily in Swope’s garage.

“He’s the hardest worker that I know,” Keene said. “He’s pound-for-pound one of the top three strongest players in our program, so he pushed me with great workouts during the offseason in his garage.”

The competitive fire of Swope rubs off on some of his teammates. For about a week, those workouts in his garage ended with competitive two-on-two basketball “tournament style” games, with Swope and Keene playing against Eli Sanders and Seth Smith.

While Swope’s goals in the classroom, in life and on the football field are massive, he wants to continue striving for greatness everyday in whatever life throws at him.

“I feel blessed to be able to play the sport I love with some of my best friends,” Swope said. “I’m grinding to see results on the field, but I also have dreams that extend beyond football. Football is helping me lay the groundwork and I’m enjoying the process.”