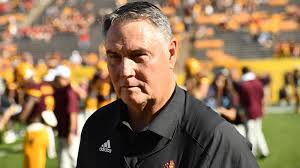 Danny White, former Arizona State and Dallas Cowboys quarterback, is now a radio color commentator for the Cowboys, who will face the Arizona Cardinals this week.

Fun fact: Danny White was the last Cowboys quarterback to catch a touchdown pass (1985), prior to Dak Prescott catching one last week against the New York Giants.

Jim: Prescott becomes the first Cowboy quarterback to catch a touchdown since…

Tony: Did I catch one?

Last week, White witnessed Prescott’s gruesome ankle injury up close in real-time while he was calling the game.

“Dak goes down and immediately you knew it was something bad because of his reaction,” White recently said on The Brad Cesmat Show. “He looked at his leg and he immediately started waiving for the trainers and the doctors. That’s never a good sign.”

White has covered numerous Cowboys games, working as a member of the radio broadcast group for Compass Media Networks’ America’s Team Radio Network since 2011. He said that he had never seen such a horrid injury in-person before.

The new starting quarterback for the Cowboys is Andy Dalton, who spent the past decade playing for the Cincinnati Bengals. He signed a one-year, $3 million deal in May to be the backup.

“What an incredible move to get Andy Dalton for $3 million,” White said. “When he came in, he looked like he had total command.”

The NFC East has been atrocious this year, but the Cowboys (2-3) are in first place. White said the defense has been horrible, for multiple reasons, including turnover ratio (-7).

“A big part of it is turnovers,” White said. “They can not buy a turnover and they turn the ball over on offense.”

He also said that because of how explosive the Cardinals offense is and how bad the Cowboys defense has been, they will need to score a lot of points this week to beat the Cardinals.

Many Cowboys fans are saying that running back Ezekiel Elliot hasn’t been used enough this year. White refuted this, pointing out that Elliot was the 14th leading receiver entering Sunday’s game.

“In order to use Zeke the way Zeke is used to being used, it has to be a close game,” White said.

Mike McCarthy is the new head coach for the Cowboys this year. With a 2-3 record, the pressure is on McCarthy to perform and make a playoff push.

“The jury is still out on Mike McCarthy,” White said. “This will be a great test for him, responding to what’s happened to them so far.”

White also talked about how different McCarthy coaches compared to former head coach Jason Garrett. Garrett had a more conservative approach to the game, while McCarthy has proven he’s not afraid to run trick plays and go for it more on fourth down and two-point conversions.

ASU has seen many changes since Herm Edwards has taken the helm. It starts with the coaching staff and all their experience. White spoke about his alma mater on the show, too.

With COVID-19 limiting training over the past seven months, White thinks teams that were able to keep pushing forward and get some workouts in, will be better off in this format.

With the Pac-12 deciding to move to a seven-game schedule in 2020, White believes it’s an open competition between all teams.

“Everyone in the Pac-12, even [University of] Arizona has a chance,” White said.