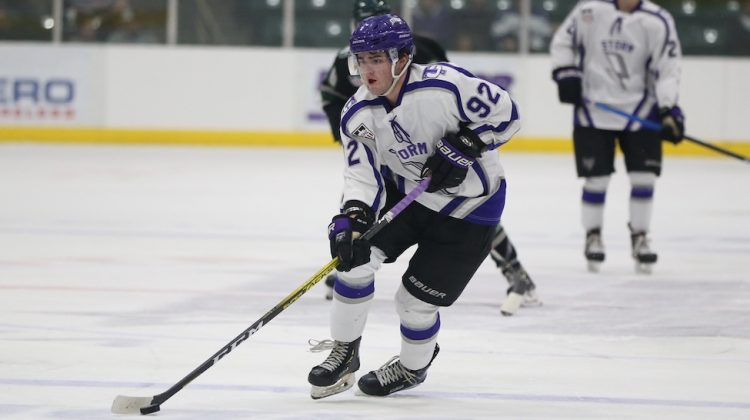 Despite not having a pick until the fourth-round due to trades and a violation of combine scouting rules, the Arizona Coyotes were content on finding high-caliber talent in this year’s NHL Draft, given their limited circumstances and having to pick later on.

It’s not an easy task, but the organization hopes to strike gold despite not having top selections.

“There’s no excuses. You have to find a player,” said General Manager Bill Armstrong of drafting lower. “…We need one player to play out of this draft. You can’t go a year where you don’t have any players. That’s what crushes you as an organization, so my big thing with the draft is we’ve always found players in St. Louis (Armstrong’s old team) from the second round to the seventh round, and if you are good at what you do, you have to squeeze out picks. The biggest thing is to be able to get two picks per year that play in the National Hockey League, then you move forward.”

Indeed, the Coyotes will move forward. Due to a previous agreement with the St. Louis Blues, Armstrong didn’t aid with the draft selections of this year’s 2020 group. It was ran by Assistant General Manager Steve Sullivan and newly-hired Associate Director of Amateur Scouting, Ryan Jankowski, instead. Here’s who the organization selected in rounds 4-7.

Mitchell Miller is a former forward converted to defense in juniors. He can activate on the rush and in 44 games played last year, he had 33 points with eight goals and 25 assists in the United States Hockey League (USHL).

At 5-foot-11, 194 pounds, the 18-year-old has room to grow and is a right shot defenseman. Originally from Sylvania, Ohio, Miller is about to begin his freshman year career at the University of North Dakota.

“I would say I’m a two-way defenseman,” said Miller describing his tool box. “I can play defense and break pucks out in the tight areas, but I can also join the rush and know when to be in the rush or stay back for defense.”

Miller also played with Team USA in the World Junior A Hockey Challenge in 2018-19. He’ll be a blueliner to monitor on the college hockey scene with North Dakota over the next few years as he tries to make his rise to Arizona eventually.

“I’ve been here for a while training and doing school, but it’s going to be a big switch,” Miller said of his college experience thus far. “At first it was tough kind of getting used to school and practice, but it’s been good so far.”

A 6-foot-4, 195-pound winger from Onalaska, Wisconsin, the Coyotes second pick of the 2020 draft was another 18-year-old, American-born player in Carson Bantle.

Bantle had 49 points in 49 games with the Madison Capitols in 2019-20, and prior to that, he was another product of the prestigious Shattuck St. Mary’s program in Minnesota from 2016-18. It’s the same place that has garnered numerous NHL stars such as Chicago Blackhawks forward Jonathan Toews and Pittsburgh Penguins forward Sidney Crosby.

After originally going undrafted in the USHL for juniors, Bantle went to a tryout in Madison, and in that span, he grew five inches. It helped him propel his game to the next level.

“I was just getting used to my new body and figuring out how to use my legs properly and keep up with the new speed I was gaining. I started looking like a baby giraffe out there,” joked Bantle of his growth in juniors. “It was more of getting used to my new body. I’d say I’ve always had quick hands so I just incorporated into separation with the puck and using my body well.”

Bantle is playing at Michigan Tech for his college hockey career, and he received his draft news while on-campus in Houghton, Michigan. His game received praise from Elite Prospects 2020 NHL Draft Guide, with this review of his attributes:

“His dexterity and puck control allowed him to slice through NTDP defenders with shocking ease. He combines his feet so well with his hands, setting up dekes with crossovers and mohawks. His strength was notable as he just kept throwing around players like they weren’t even there; really impressive stuff.”

A two-way centerman out of Stockholm, Sweden, Filip Barklund had 30 points in 2019-20 playing in the top-tier of the Swedish Hockey League.

Acquired through a seventh-round 2021 selection with the New Jersey Devils, the Arizona Coyotes received a 2020 seventh-round pick from NJ in a trade and took winger Elliot Ekefjard out of Sweden. He is another 6-foot-4 prospect out of the SHL. Ekefjard had 61 points between three different levels last year.

Similar to Bantle, Ben McCartney was another point per game player in juniors, registering 61 points in 61 games in the WHL in 2019-20. He’s a 6-foot, 185-pound left wing who takes up a lot of real estate in front of opposing goaltenders.

With the late draft picks out of this group, Armstrong hopes to build a more imposing team in Glendale, as he stated prior to the draft when asked about the identity that he wants future teams to look like.

“I’d like to grow into an organization where teams come into the desert worried about getting pricked by a cactus every time they turn around,” Armstrong said on Tuesday. “I want to be harder to play against as an organization.”