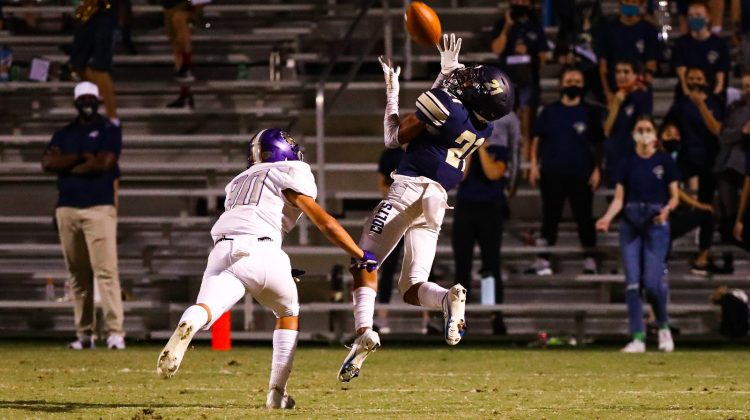 A showdown between two undefeated 6A schools, 15 minutes apart, came down to a hail mary.

The Casteel Colts (3-0) put on a defensive showcase against the Queen Creek Bulldogs (2-1), holding them down to zero points in the first half in a 12-7 win. The game was capped off with an interception by freshman defensive back Jeremiah Newcombe.

The Colts controlled the time of possession, running 31 plays compared to the Bulldogs nine in the first half. They also had nine tackles for loss and four sacks on defense. Newcombe set the tone in the second half with an interception for the Colts on the Bulldogs’ first drive.

That set the Colts up for a score, with Dane Christensen finding Dominic Digian for the second time in the end zone. They went up 12-0 after a missed two-point conversion.

Colts add on!@DChristensen_12 finds @Dom_Digian in the end zone for the second time tonight. They miss the 2 pt. conversion.@CasteelFootball 12@QC_football 0

Christensen was electric and at one point completed 12 straight passes in the first half. He finished 29-33 with 229 passing yards and two touchdowns.

His favorite target was Isaiah Newcombe, who added onto his 6A receiving yards lead, with 10 catches for 98 yards. Queen Creek quarterback and USC commit Devin Brown faced pressure all night long, going 3-11 for 30 yards in the first half. He finished 8-21 and had a 22-yard touchdown to Davey Morales in the third quarter.

Penalties plagued all momentum for the Bulldogs. They finished with five, three of which were in crucial third down situations. Next week, Casteel will face Williams Field. Queen Creek will play a non-conference game against Peoria.