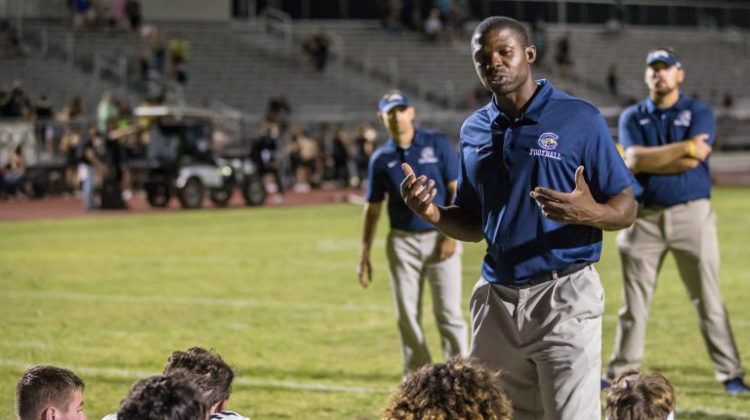 The word “student-athlete” is used to describe high school and collegiate athletes in order to stress the importance of education. Some coaches are scholars and students too.

Casteel High School head football coach Bobby Newcombe considers himself a lifelong learner who is well-rounded in many aspects of leadership and education.

After playing football at the University of Nebraska, followed by brief stints in the NFL and CFL, Newcombe found himself striving for purpose with education.

He went on to work for the Apollo Education Group at the University of Phoenix for 15 years as a manager, director and counselor. While working there, he earned his doctorate in management, which focuses on leadership and development, two master’s degrees and a bachelor’s degree.

“To me, education is a lifelong journey that really took off for me at Nebraska, where I was able to earn my bachelor’s degree in management while playing football,” Newcombe said. “Then opportunities kept arising for me to go further into my education so I found my purpose.”

In the 2001 NFL Draft, Newcombe was drafted in the sixth-round, 166th overall by the Arizona Cardinals. He didn’t make the roster, but did lay roots in Arizona.

He met his wife, Rachel, while they were at the University of Nebraska. She attended school at Arizona State University, while he was trying to make an NFL roster.

“It was tough to be married and then be traveling around the country and Canada to try to play football, while she was still at school,” Newcombe said. “Not seeing your wife is always hard. But we both needed to do what we felt was right for us and it worked out well.”

“We do pretty well at separating dad and coach,” Bobby Newcombe said. “I just navigate being both based on what I feel my sons need. I’m always proud of what they accomplish.”

As his sons were growing up, he coached their flag football and Pop Warner teams before realizing that he wanted to be a leader for higher levels of football.

Eventually he coached at Mesa Community College and Basha High School, before becoming the wide receivers coach at Casteel. Following an undefeated season and 3A championship in 2017, Newcombe took over for Spencer Stowers as the new head coach.

“I always knew that eventually I would become a head coach somewhere,” Newcombe said. “Once I had the opportunity here, I was ready.”

He was thrust onto a team that was making the jump from 3A to 5A in 2018. After back-to-back nine win seasons under Newcombe’s leadership, Casteel made the leap to 6A for 2020. The rise has continued.

After an extensive offseason full of uncertainty due to the COVID-19 pandemic, Newcombe and the Casteel Colts are thrilled to be back on the field together.

“We’re grateful just to be able to return the field,” Newcombe said. “Even preconditioning brought so much joy to this group of players.”

“Be a champ” is the team’s motto. Newcombe believes that the hard choices in life are what separate the great people and athletes from the rest of the pack. The culture of Casteel football reflects that mindset.

Newcombe is no stranger to this, as he has lived a life full of many obstacles and tough decisions. Born in West Africa, he came to the United States with his mom and dad when he was two and a half years old because his dad volunteered in the Peace Corps.

Coming to the United States meant moving all over the country to Arizona, New Mexico and Houston, Texas. In Houston and across New Mexico, they lived on some Native Reservations because his dad was a director of Indian Health Service.

“We made the most of our opportunities in many tough situations,” Newcombe said. “We lived in some interesting places and overcame issues that helped shape who I am today.”

Once he earned the opportunity to play football and study at the University of Nebraska, Newcombe further understood how to take advantage of opportunities that were presented to him.

His head coach at Nebraska during his freshman season in 1997 was Tom Osborne, who Newcombe grew to respect and admire as he began his own leadership journey.

At Casteel, Newcombe teaches marketing and runs its football academy program, which is a physical education class for football players that focuses on training, watching film, diet, academics and everything else that helps keep his players on track.

Teaching is one of Newcombe’s greatest joys, especially after all he’s learned about leadership over the past two decades.