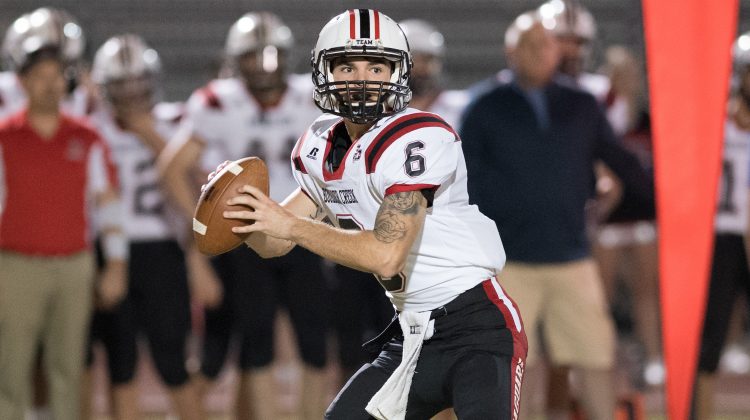 Now at the halfway point of the season, teams are already looking for statement wins to put themselves into a good spot in the state tournaments. More teams look to make that statement not just against fellow west side powers but also a national power.

Three incredible games and a tough one-point loss against Casteel has put attention on Boulder Creek in 2020. With a favorable final three games of the season, a battle against Sandra Day O’Connor on Friday night could play a major role in the final 6A rankings. SDO’s 2-2 record includes losses against powerhouses like Highland and Desert Edge, and now the Eagles battle a team that may be the most similar to themselves all season.

BCHS senior quarterback, Bear Milacek, has been electric. 669 pass yards along with another 194 rush yards has helped turn this team into 6A contenders. Even with Milacek’s production, it certainly doesn’t shadow the productivity of senior running back, Jacob Cisneros. With 12 total touchdowns and over 1,000 offensive yards in just four games, Cisneros has made himself a star in Arizona high school football. Expect the offense to be fierce-looking to keep up or exceed their average of 36 points per game.

O’Connor looks to build upon last week’s victory and a win that could improve their team and their season. Following a win against Shadow Ridge, the Eagles are looking to double down on victories. A tricky offense has seen five different SDO players attempt passes this season but one constant has been senior, Donavin Fontaine with 663 total yards to help O’Connor march down the field. Defensively, Brandon Craddock has been remarkable. The junior has totaled 54 tackles and seven tackles for loss along with two fumble causes in four games.

These two teams continue to grow in the 6A Conference and make a great west vs. west battle. The key to victory for any team against Boulder Creek is to tame the Jaguar’s offense but in the case of Sandra Day, their offense must play with the production they typically do to keep themselves in the game.

We were projected to lose this game tonight unfortunately. We aren’t the same team we used to be, my team and I played hard and came out with the 35-21 Win‼️@BCJAGS @gridironarizona @CodyTCameron @Jacob20Cisneros pic.twitter.com/lHvcNGjhOR

A top-five team in the nation returns to the West Valley for the second time in 2020. The Chandler Wolves defeated the defending 6A State Champions, Liberty, 44-10 to open the 2020 season. Now they visit fellow Inaugural Open Eight member, Centennial, to begin the second half of the season.

These two programs have only met four times, including back-to-back wins for Centennial in 2009 and 2010, and victories for Chandler in 2013 and 2014. Offensive production has been the name of the game in every matchup and with Chandler averaging 57 points per game through their first four contests, the Coyote defense must play their best game of the year.

You can’t contain Chandler, you can only hope to slow them down. A lingering sour taste may remain in the Coyotes’ mouths since their 42-0 loss to Hamilton to open the season. It was Centennial’s first in-state shutout loss since the 1997 season-opener. It is a necessity to hassle Wolves’ quarterback, Mikey Keene, who has yet to throw an interception this season, with ‘Yote defenders such as senior, D.J. Gleash, who has totaled a team-leading 38 tackles and five sacks, and senior, Devin Sanchez, who has racked up five tackles for loss.

The Centennial offense still seems to be searching for their identity but one staple has been Joshua Gasca. The senior has nearly averaged 100 receiving yards per game and has 100 more total yards than any other player on the team. The only thing for certain is that the offense must execute better than in their shutout loss to Hamilton. If the offense can find their groove, the Coyotes can be a threat. While they may come into this game as an unusual underdog, Centennial is no stranger to upsetting top-ten national opponents.

James Scott with the hand off from Glimpse for the score. Gardner’s kick is good. With 7 min left in the game. Centennial 31 Pinnacle 21 pic.twitter.com/bJdj5Rjcac

The Ironwood Eagles suffered their first loss of the season against rising powerhouse, Desert Edge last week. Along with the 41-7 loss, the Eagles may have also lost San Diego State-bound quarterback, Will Haskell, who exited the match late in the game due to injury. Other offensive powers must step up such as senior, Bubba Mannino-Faison, who has totaled 205 yards and five touchdowns. Most importantly, Ironwood must stop SMHS with their defense. Mannino-Faison has also picked up half a sack in the backfield while also swiping an interception this season.

Sunrise Mountain stands with an undefeated record following remarkable victories against 4A defending champs, Mesquite, and 6A champs, Liberty. Their victories have convinced MaxPreps to rank the Mustangs as the fourth-best team in the state of Arizona. A victory against Ironwood would only further convince their consistency ahead of a fierce 5A battle against Desert Edge next week. Senior, Tommy Arnold has been fantastic in many different facets of the team, accumulating 446 total yards of offense through four games while racking up 12 defensive tackles and 3 TFL.

Ironwood’s first task will be to stop Arnold on offense but that task may likely force other offensive stars such as Bryce Cord and Chase Birdsong to step into the spotlight.

Great having our Ironwood Band out here on a Friday night. pic.twitter.com/yiGTvXqdkW

The Glendale Prep Griffins have marched out to an incredible 3-1 start in 2020 following a 3-6 season in 2019. A nail-biting 58-57 victory against Arete Prep and a near victory against strong 2A power, Chandler Prep, has given the Griffin fanbase something to root for. Up next are true tests for GP against teams who defeated the Griffins last year, Tonopah Valley and Parker.

The Griffins have been led by senior, Malachi Mizysak. Production has come all over the field from Mizysak, including nearly 500 yards of offense, 37 defensive tackles, two sacks, and an INT. Elijah Mizysak has been impressive as well, featuring eight tackles for loss and 21 solo tackles.

This will be a home game for Tonopah Valley following three straight losses after a season-opening win. This Friday against Glendale Prep could be a season-defining win for the team with two winnable games on the horizon to end the season. The Phoenix have four different players with over 200 yards of offense this season, led by sophomore, Chace Logan.