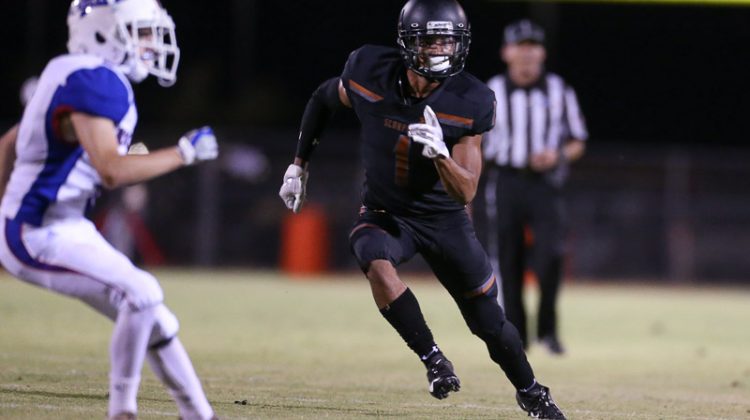 This week, there are plenty of west side rivalries and a few surprise teams to open up the season 2-0.

The Difference Ten Years Can Make

For the first time since leaving Cactus as assistant coaches a decade ago, twin brothers Mark and Marcus Carter return to the sidelines of CHS for the first time. Their last game as coaches at Cactus was a heartbreaking 21-20 loss in the quarterfinals of the 2010 State Tournament to Desert Edge. Now they stand on the opposing sideline of the Cobras as co-head coaches of Desert Edge, vying for a shot at the 5A State Championship or a spot in the Open Division Playoff.

“Out of all the schools we could have played this year, especially in our first year at Desert Edge, we see Cactus on the schedule and some of the players that played under us [while at Cactus] are now coaching there,” Co-Head Coach, Mark Carter told Best in the West. “It’s going to be a really surreal experience.”

“It’s going to be very emotional,” Co-Head Coach, Marcus Carter said. “Without Cactus and Coach Fetkenhier, and all the coaches over there, we wouldn’t be here. It’s going to be emotional but at the same time we have a job to do and we have to do our best to come out of there with a win.”

The Cactus offense got rolling in a massive victory against long-time rival, Peoria, last week. The Cobras scored 21 points in the first quarter alone and sophomore quarterback, Will Galvan settled in, throwing for 176 yards and two touchdowns on the game. Another key to the offense was sophomore running back, Damian Jiles, who ran for 123 yards.

The Desert Edge defense is full of athletes who can put up a brick wall such as senior, Steven Ortiz Jr., who already has two interceptions this year and Myles Hobbs, who has totaled 18 tackles, coming off a big win against Sandra Day O’Connor. Watch out for junior quarterback and Washington State commit, Adryan Lara, who threw for 205 yards and three touchdowns in last years meeting

Rivalry of the Week

Another week, another west side rivalry. This Friday night is the ninth meeting between Liberty and Sunrise Mountain with the LHS holding a 6-2 all-time advantage.

The Sunrise Mountain Mustangs have looked good this season with a blowout win against Cactus and a tight victory against defending 4A Champions, Mesquite. Following back-to-back 4A opponents, SMHS now faces the defending 6A champions who just found their stride. After a 44-10 loss to national juggernaut, Chandler, the Liberty Lions shutout Red Mountain 30-0 in a rematch of last year’s 6A State Championship.

Liberty’s senior quarterback, Brock Mast shined against Red Mountain, putting up 221 pass yards and two touchdowns while four other players on offense racked up over 40 total yards each. Their seniors on defense stepped up as well with Cody Horn grabbing a sack, Zay Johnson snatching an INT, and Koltan Cortez leading the team with 11 tackles. It seems every week so far, a different Lion has stepped up and embraced the spotlight for Liberty.

Sunrise Mountain has looked sharp in 2020 but hasn’t faced anything like Liberty this season. Senior, Tommy Arnold has been incredible as the running back in his first two games, accumulating 299 yards on the ground. Himself and senior quarterback, Travis Ward, must work together to slice up the Lions’ defense and allow their own defense to do their job. Senior, Owen Thomas has already racked up four sacks while fellow senior, Steven Hoffman, has picked off quarterbacks twice in 2020. This may be the most difficult battle for SMHS all season and they’ll have to show in quarter number one that they are up for the challenge.

RIVALRY FRIDAY NIGHT IS UPON US! 🏈

This Friday night, you can watch the 9th rivalry meeting between @LibertyFBLions & @SunriseMustangs LIVE & FREE on PSBN! Liberty owns the all-time record of 6-2.

The Stallions Strutting Early On

The Shadow Ridge Stallions start their season 2-0 for the first time since 2013. The Stallions have been swamped by East Valley opponents like Westwood and Basha, and now take on Mountain Pointe. Shadow Ridge has been lucky enough to host all three battles at home to open the season.

2020 could be the most successful season in Shadow Ridge history with their offensive production. SRHS has averaged 45 points and nearly 400 yards of offense in each of their first two games. Junior quarterback, Seth Gallardo, has thrown for 200 yards per game while senior running back, Jacob Thurman, racked up over 100 rushing yards in each of his first two games.

Shadow Ridge now faces a struggling 0-2 Mountain Pointe team who has faced powerhouse teams, Higley and Centennial to open the season. Don’t let the scoreboard fool you, Mountain Pointe is a quality team who can pound the ball through a defensive line and make strong plays on defense. If Shadow Ridge has something to say to the 6A Conference, this is the week to make that statement.

The @ShadowRidgeHS football team showed up for their home opener against a strong Basha team from the East Valley, taking down the Bears 41-31 on a whopping 349 rushing yards, including 142 from Senior Jacob Thurman! #DysartAthletics @SRHS_Stallions pic.twitter.com/ASmYjnKSs2

I am a fan of 8-man football. It’s almost a different game of football. In the West Valley, Anthem Prep is the only 8-man team. Following a winless 2017 season, the Eagles have finished their past two seasons a 4-4. 2020 looks to be a different story as the Eagles have started 2-0 in their six-game schedule.

This week brings Bagdad High, a team that went flawless in the 1A West Region last season and was eliminated early from playoff contention. The Sultans of Bagdad pulled off a 64-22 victory against Anthem Prep last year and Bagdad didn’t even score in the second half of the game. Junior quarterback, Jake Crawford, has helped Anthem Prep buff up their offense after throwing for 324 yards and rushing for 128 yards in their 40-20 win last week against Desert Heights Prep Academy.

The Anthem Prep defense must bring their A-Game to keep Bagdad off the scoreboard after the Sultans scored over 45 points in their first two games of 2020. The Eagles have totaled seven interceptions this year, three of those from senior, Ben Dixon, along with a total of seven sacks from seniors, Ryan Osha and Jacob Motter. The senior leadership on this Eagles team will be the difference-maker this year in how deep Anthem Prep’s 2020 playoff run can be.

Making the Next Step

2018 was a remarkable year for the Glendale Cardinals. The team won all but two games in the entire season and those two losses were only by one point. Unfortunately, for the Cardinals, one of those losses was in the first round against Sahuaro. 2019 wasn’t a bad year, winning the region championship but Glendale was still ranked outside the top 16 and was granted another tournament spot by the region title. Then again, Sahuaro defeated Glendale in the first round.

In the past three seasons, GHS has earned a 27-5 record but was never been ranked a top-ten seed in the tournament or advanced to the second round. In 2020, Glendale is off to another hot start, defeating Lake Havasu and Thunderbird at home. In their first road game of the season, the Cardinals travel to Arcadia, who have struggled in their first two games.

With Glendale’s strength of schedule, they could certainly run the table and go undefeated. Senior quarterback, Rocco Bruney, was responsible for five total touchdowns against Lake Havasu. But the season goal isn’t to go 8-0 in the regular season, it’s to finally grab that elusive playoff win. A strong showing throughout this year will give the Cardinals confidence they can grab a playoff victory in 2020.