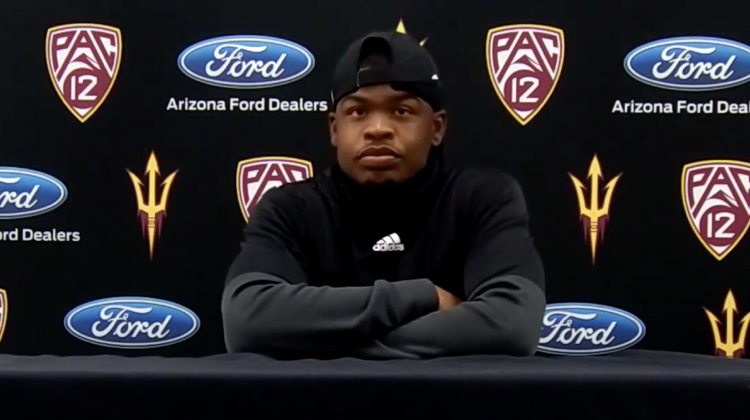 ASU’s defensive back coach Chris Hawkins prepares his new team for his former team as kickoff against the USC Trojans in LA is a little over a week away. Finally, the Pac-12 will see life, and that all starts November 7th as ASU takes on USC with a 9 am kickoff.

Hawkins played at USC and was a leader on the team from the start, but now his loyalty lies with the Sun Devils as he is one of the youngest coaches in college football, as the ASU defensive backs coach. He’s not only one of the youngest, but he is also coaching one of his former teammates from USC, Jack Jones. After his collegiate playing career, Hawkins spent one year as a grad assistant with USC before accepting the offer from ASU to be a full-time coach and so far, the transition from GA to coach has been a smooth one,

Hawkins addressed the media today and said, ” we are on our way to being pretty much ready… We had some slight injuries, and we are getting some guys back, so we are trying to be fully healthy when we step foot in Los Angeles. We are almost there,” with regards to the defensive backs being ready for their first game of the season against the Trojans.

According to Hawkins in today’s press conference, the players are anxious to get into USC prep and get this game going, “we have a lot of guys that are from California, so they are excited to get back down there and repeat what happened in 2018.”

It’s a homecoming for Hawkins, but the ties to USC aren’t over just yet, though. Hawkins’ brother, Armond Hawkins Jr., works for USC football as a recruiting liaison, “He’s (Armond) trying to make some waves. He’s doing a good job, but at the end of the day, I am still the guy. He has to compete with me. I wish him nothing but the best, ” Hawkins told Sports360.

But Hawkins’ mindset going back home? ” To me, it’s just my first game as a full-time positions coach… I am not looking too much into it because if I am too emotional, then my players are emotional. So I have to be even-keel, so they are even-keel, and we are going to go in there and do our jobs.”