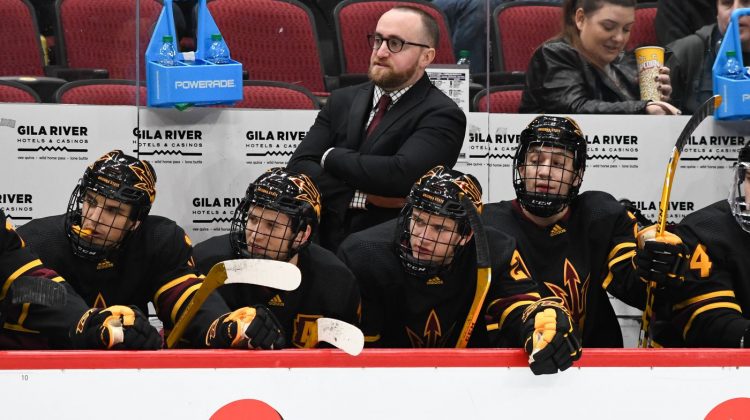 Ever since Arizona State became an NCAA Division I hockey program in 2015, the team has played as an independent school with no conference.

Although this still holds true, with the COVID-19 pandemic looming, the Sun Devils have an interesting slate of games in 2020-21. In an agreement with the Big Ten Conference, ASU will play 28 games all against Big Ten adversaries.

They will play the seven schools four times each, and all contests are on the road. There will be no Arizona State home hockey games in the 20-21 season.

“We believe that this was the best option presented to us to give our players a meaningful season,” said ASU head coach Greg Powers. “It’s going to be set up in an arrangement where we can do travel segments…They (the Big Ten) were very forthcoming and helpful in setting it up to where we can make it as easy as we possibly can on our guys from a travel standpoint.”

On the road or at home, we're thankful to have a season. #ForksUp

In college hockey, the Big Ten consists of Notre Dame, Wisconsin, Ohio State, Michigan, Michigan State, Penn State, and Minnesota. This is not a permanent ASU move to the Big Ten, but it’s a one-time ordeal due to the pandemic. Additionally, the Sun Devils cannot qualify for the Big Ten Tournament.

Although it seems like ASU would be logging a lot of air miles, their trips to the midwest won’t all be separate. Rather, the team will make seven trips to Big Ten country to play multiple teams. For example, in one trip ASU could play the Michigan schools on one trip and then the next time they travel, they’ll take on Notre Dame and Ohio State in one go around.

It’s still a lot of miles and travel, but it’s something that the Sun Devil hockey program is accustomed to being the only Division I school west of the Rocky Mountains. In a normal year, the group travels for around 9-10 road trips ranging from around the country, from the shortest ventures to Colorado, or to the longest like flights to upstate New York.

Thus, the 3-4 hour plane rides to Columbus or South Bend don’t seem as long compared to a normal travel schedule. Of course, the down side of all this is no home games in Tempe. Though, Powers noted that Big Ten schools are planning on return trips to Arizona in the future.

Some of those games could be played at ASU’s new on-campus multi-purpose hockey arena that is on its way. Powers stated on Tuesday that it’s planning to be done and have the doors open in August 2022, which would be a completely new ballgame away from the tight confines of Oceanside Ice Arena, where the Devils currently play.

Regardless, for this season, his team is ready to embrace the challenge of all road games and not being in the warm climates during the winter time.

“I think for anyone that knows me and knows our program, we are not afraid of adversity,” Powers said. “This is just another obstacle we’re looking forward to conquering.”

As for academics, the entire team is currently going through online classes so there won’t be much of an adjustment to remote learning on the road.

Another intriguing aspect of the set-up is the PairWise Rankings, which is college hockey’s way of determining at-large bids for the 16-team NCAA Tournament. In a normal year, these rankings are imperative just like strength of schedule in college basketball, defining quality wins and RPI against top-ranked programs.

ASU relies on this heavily as an independent program, as they don’t have the luxury of winning a conference tournament to make the field. Now playing Big Ten Schools but not being able to make the conference tournament, the Sun Devils are still going to keep their own standings tab, trying to see where they would match up with the rest of the schools.

Normally, Powers piecing together a schedule as an independent school is pretty daunting. It’s a lot of phone calls, conversations, and travel talk. This year, though, his schedule is a lot easier to piece together, and despite not being under ideal circumstances, they are making due with the opportunity that is presented to them. They’ll get a chance to showcase the young program and compete against high-caliber hockey teams.

“You can make the case that it’s the premiere conference in college hockey,” Powers said. “Every team is really good. There’s no lay-ups, there’s no give me’s. You better be ready to play every week.”