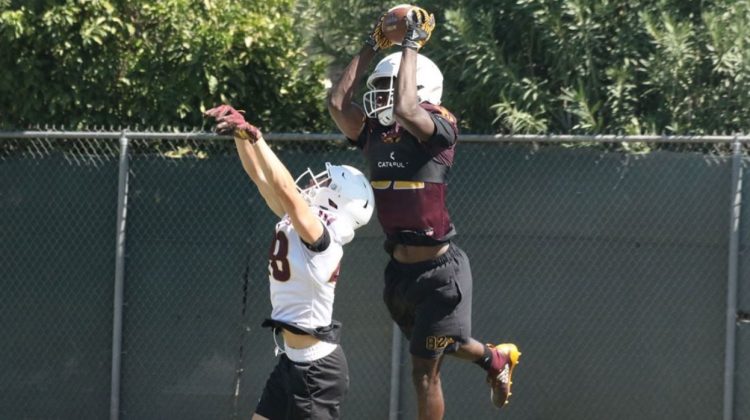 Arizona State wide receiver Andre Johnson appeared in three games last season for the the Sun Devils, but took advantage of a new rule where an athlete can appear in four games or less without it counting against their eligibility.

Johnson redshirted his freshman year, but believes that it has helped transform into the player he is becoming for his sophomore campaign.

“I feel like I’ve been a lot more focused this year,” Johnson said. “Last year I wasn’t really bought completely into the program. I wasn’t focused on what I needed to do to get better, but this year I’m making sure I do what I can to make sure I can get playing time this year. I kind of cut out some things that distracted me.”

While speaking with media Wednesday afternoon, Johnson discussed why this year, he’s more bought into the program under head coach Herm Edwards compared to his first season on campus in Tempe.

“Not playing last year, it kind of got to me because I knew I could,” Johnson said. “I just stopped myself and I wanted to make sure that didn’t happen this year. I want to make sure I do what I need to do and if I wasn’t good enough, I just have to get better next year. But I knew I could do it and I just had to stay focused.”

The 6-foot-1 receiver has found a mentor through senior teammate and leader Frank Darby, who is keeping Johnson on track. Many younger players on the team have also expressed how much Darby has helped them.

“This year specifically, he’s really been trying to get in my head to make sure I am focused all the time,” Johnson said of Darby. “Every day before and after practice he tells me what I need to work on and just makes sure my head’s straight and that I’m not getting into the ways I was in last year where I wasn’t focused. He’s been a really great mentor for me this year.”

The Tolleson Union High School product knows he will have lots of support in the stands, as he grew up only 30 minutes from Sun Devil Stadium. He has a lot he wants to show off this season with a new sense of purpose after the departures of last year’s wideouts such as Brandon Aiyuk and Kyle Williams. Johnson is ready to excel with an opportunity laid in front of him.

“I felt like I let my city, my family, my friends, everybody down,” Johnson said. “They’re all really excited to see me play and excited to make plays so I just wanted to make sure that they’re proud of me and I can’t have that happen if I’m not on the field. Just thinking of them made me want to focus even more and get on the field and make something happen.”

Johnson and the Sun Devils will take on USC for their game of the season on November 7. With game prep underway, the buzz in the locker room is intensifying and the players are getting more amped up.