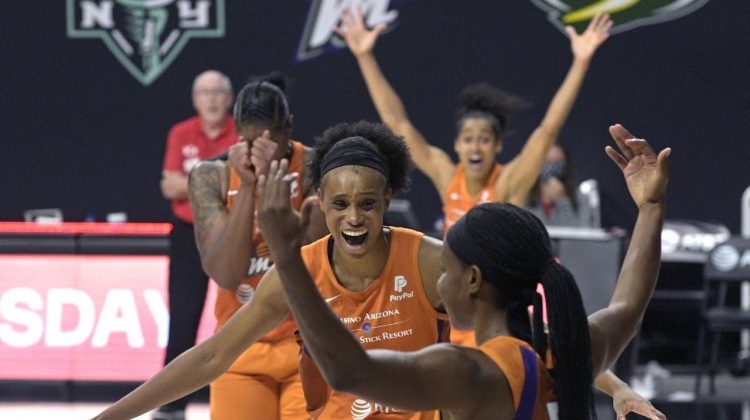 “It’s not going to be instant oatmeal.”

That phrase has been uttered many times from Phoenix Mercury guard Skylar Diggins-Smith when asked about the roster cohesion and the team hitting its stride in the 2020 season. The All-Star guard was a key addition in an offseason that saw Sandy Brondello’s roster transform. DeWanna Bonner, Briann January and Leilani Mitchell were out, Diggins-Smith and Jessica Breland were in.

With the point guard paired with stars Diana Taurasi and Brittney Griner, the Mercury had their big three to make a run at the WNBA title.

But it wasn’t instant oatmeal.

In a condensed season in a bubble, or “Wubble,” at the IMG Academy, the Mercury started the year 6-7. Jessica Breland opted out of the season before moving to the Wubble. Brittney Griner left the team on August 22.

But the team started to hit their stride, finishing the season on a 7-1 run to end the regular season. They secured fifth seed in the playoffs and would play a single elimination game against the Washington Mystics, the defending WNBA champions who also had their fair share of roster turnover and injury this season.

The Mercury had a higher seed and three days to rest, a rarity in the Wubble, but Tuesday night, it was not instant oatmeal either.

Taurasi and Diggins-Smith, the highest-scoring backcourt in the league, struggled early. The Mystics consistently led by double-digits and had an answer for any type of scoring run the Mercury went on throughout the first three quarters.

The Mercury erased an 11-point lead and went on a 17-0 run to start the 4th quarter led by Diggins-Smith and Kia Vaughn. In a back-and-forth final five minutes, Mystics had pulled away with a 84-82 lead with a few seconds left in the game.

The Mercury escaped with an 85-82 win and advance to the second round.

Peddy was a midseason addition for depth purposes who had been cut by the Mystics earlier in the Wubble. Diggins-Smith, who had turned the ball over the previous possession to give Washington the lead, drew three defenders to her before launching a cross-court pass to Peddy in the corner. The reserve guard had made only two 3-point shots in eight games with the Mercury this season, but she pump-faked, side-stepped her defender and sent her former team home as time expired.

“For me to hit that shot against them, it’s a fairytale moment,” Peddy said. “I don’t think you can write it up any better than that.”

Diggins-Smith, who ended the night with 24 points and five assists, notched her first postseason win of her seven year playing career. Opportunities to play in big game were a big reason why she wanted to be traded to a contender like Phoenix this past offseason.

“It’s the end of the game and we got each other’s back when somebody is down, being able to bring your teammate up out of it or being able to be a good teammate,” Diggins-Smith said. “We have a locker room full of those women who are selfless and just want to win and see each other do well.”

Peddy admitted through a grin that when Brondello runs late-game scenarios in practice with the team, the guard is often not on the court. That may change as the Mercury prepare for the Minnesota Lynx in a second round, single-elimination game on Thursday.

“Sandy has never run that play for me, but I’m pretty sure next practice, I’ll be out there.”

After a slow first half, Taurasi rallied for 18 second-half points and is now 14-1 in win-or-go-home games in her WNBA career. The league leader in career points said Tuesday’s conclusion was unlike any she’s seen and this team has endured such unique circumstances from the start of training camp to the postseason.

“There’s something about this team that doesn’t want to go home,” Taurasi said. “Today could have been easy. ‘We’ve done enough, let’s go home.’ This team just wants to stick around.”