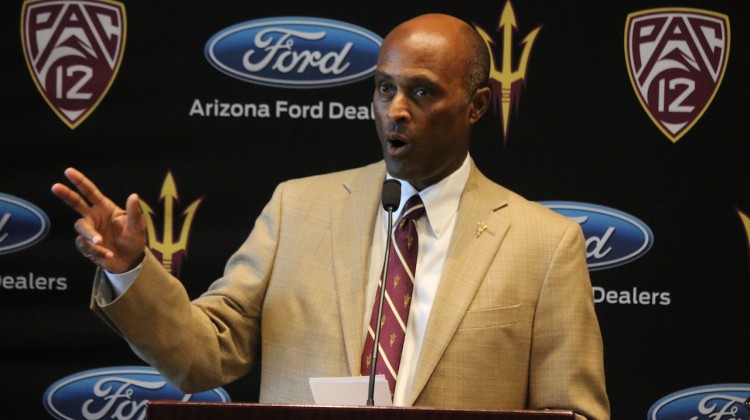 The day that Herm Edwards was hired as head football coach at Arizona State, I wrote “In Ray I Trust”. Now it’s time for Anderson to leave Tempe and save the Pac-12 from current commissioner Larry Scott.

I maintain that the Sun Devil VP of Athletics is the person best suited to begin repairing a conference that has been pushed to the back end of the Power Five in the sports of football and men’s basketball, the two that bring in the most revenue. The events over the last couple of weeks have shown that Scott needs to go and Anderson should move into his chair.

Anderson started his strong run at Arizona State in 2014. Early on, he saw that the football coach he inherited wasn’t a good fit and brought in Edwards. He plucked Bobby Hurley out of Buffalo to turn around a slumbering basketball program.

He withstood the public arrows after Tracy Smith struggled early as his baseball coach, wrestling is thriving, as is hockey. Sun Devil Stadium is no longer a dilapidated relic. I could go on and on, but it’s time for him to go. For the betterment of all within the Pac-12, Anderson is the right fit, right now to replace Scott.

The conference tapped Ray on the shoulder in the midst of the officiating crisis in 2019. His NFL administrative experience gave him the chops to take on something as simple as the incompetence that was shown by Pac-12 adminstrator Woodie Dixon.

Anderson stepped in, and took on the subject of poor officiating. I would trust that he would have more of a plan to restart the Pac-12 than what we’ve seen out of Scott over the last 48 hours. The time for the presidents of the conference to make the change is now.

Jean Boyd or Deana Garner Smith would be terrific internal candidates to replace Anderson at ASU. I’d pick up the phone and call Rocky Harris too.

The lack of urgency coming out of Scott’s office has to stop. If it doesn’t, then get out of the Pac-12 and get to the Big 12 or a new conference that will likely come from COVID-19 and impending budget shortfalls. The madness has to stop. Ray Anderson is the perfect person for the job.