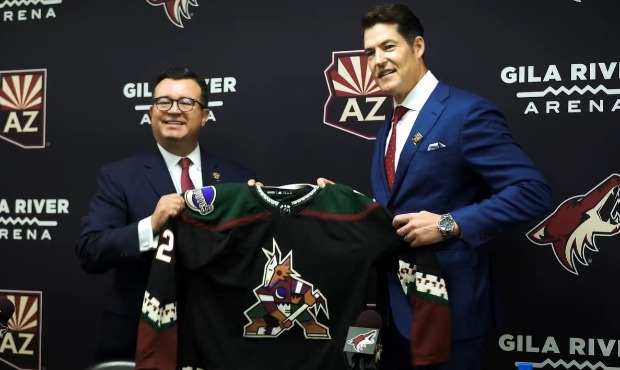 New Arizona Coyotes General Manager Bill Armstrong had his vision for the franchise displayed on his right hand during his introductory press conference with the organization on Tuesday morning.

His 2019 St. Louis Blues Stanley Cup ring glowing on his Zoom call with the media, Armstrong put out a strong opening statement on what he intends to do now that he’s in Arizona. He was straight-forward and direct.

“I didn’t come all the way here to the desert to get a tan,” Armstrong said. “I came here to win a championship.”

Just about every new GM in any sports franchise has the same sentiment, pleading a case that they are there to take a franchise to the pinnacle of athletics and win rings. The subtle difference with Armstrong? He has the resume to back it up at many different levels.

Putting together a Stanley Cup winner in St. Louis as an Assistant GM, Armstrong was pivotal in helping with key draft selections such as goaltender Jordan Binnington and defenseman Colton Parayko. As a player, Armstrong scored the game-winning goal as a junior player in the 1990 Memorial Cup (Canadian Hockey League Championship) to give the Oshawa Generals a title.

Then in 1999 as an assistant coach with the American Hockey League’s Providence Bruins, Armstrong won the Calder Cup. He’s won at all levels, and has intentions on bringing that pedigree to the Coyotes – an organization that is in need of strong leadership in its hockey operation department and front office.

While going through interviews, Coyotes CEO Xavier Gutierrez and Owner Alex Meruelo said they knew Armstrong was their guy after 15 minutes of speaking with him.

“Alexander Meruelo and I were talking with Bill and he (Meruelo) texted me and says, ‘I’d run through a wall for this guy,'” said Gutierrez recalling Armstrong’s impression after interviewing him. “The reality is…you are in his presence and he’s just such a leader. He really does have a presence and it comes with one, a track record of success at every level. It’s years of experience and expertise, but also a vision…This was a very important hire for us. We wanted the right person but wanted the right human being who would fit with us and the culture we want to create.”

As for what lies ahead for Armstrong, the road is rugged and complex. Through an agreement with the Blues, Armstrong is not allowed to aid the Coyotes in this year’s NHL Draft process. Assistant GM Steve Sullivan, who was serving as interim GM, will run the draft.

The Yotes’ don’t have draft picks through the first three rounds due to trades and a violation of combine scouting rules. The franchise has a young nucleus of talent, but also a variety of veteran contracts with one year left on their deals. Like many businesses, the pandemic has also affected the Coyotes, causing a variety of lay-offs and furloughs among team employees in recent months.

The Coyotes are not your average NHL organization. Between past financial troubles and arena relocation discussions, there are a lot of obstacles that might not be the same in other traditional markets for hockey.

Yet, through a good interview process with Meruelo and Gutierrez, Armstrong trusts the ownership. It’s why he accepted the job, and he is embracing the on-ice challenges that lie ahead, hoping to bring the white playoff towels back to Gila River Arena.

“I like challenges. I think that’s the first thing,” said Armstrong of why the job was right for him. “I was extremely excited about getting into an organization and putting your thumb print in there. I think I have that ability to make a lot of changes that need to happen in certain areas. I think I can get in there and do that. That’s my forte of building an off-ice team. This franchise, like I’ve said before, this ownership is committed.”

Former Coyotes GM John Chayka took an analytical approach to many of the players that he signed, relying on data and certain criteria that led to signings and draft picks. With Armstrong, it’s apparent his skills of acquiring talent have been homegrown, through drafts and strong prospect development.

He too, relies on data, but noted that today’s NHL scouting departments have to be multifaceted, focusing on analytics as well as an old-school style of player analysis.

“Your scouts are actually changing. They have to be able to read analytics and use video, and now with the pandemic and not being able to go across the border at times, there’s different challenges,” Armstrong said. “A good scout moving into the future is someone that is a hybrid that can read analytics, watch video, go to games, and do the background research. They have to be committed. It’s a hard job and we need to find great hockey people. There are some here, but we are going to go out there and find some more.”

With a new face running the scouting department, Armstrong will now look to navigate the franchise through the years ahead, taking the helm after a career playing, coaching, and scouting for the last 20-plus years.

“I’m here at the right time…I’ve done all the steps and it’s been a long process to get here,” Armstrong said. “But the one thing I love about it and I didn’t really realize it much until we got to the interview process. When I was in there, they asked me, ‘What’s special about you?’ I said I can sit in every room. I can go in the coaches room and talk hockey, I can go to the scouts room and talk to the managers. I’ve been in every role and I believe you get to a place at the right time, and that’s where I am here today.”