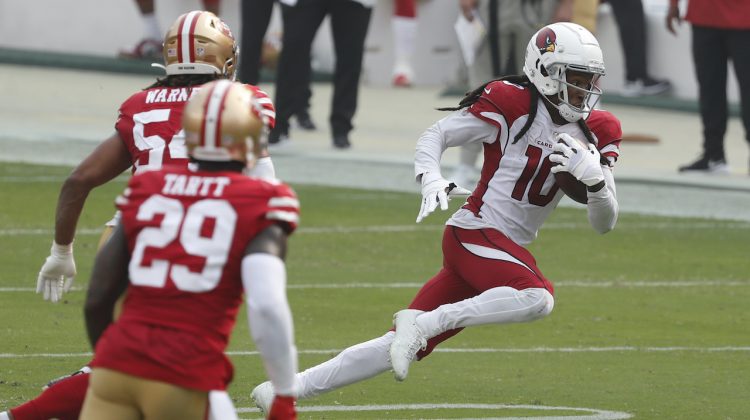 DeAndre Hopkins had a debut to remember. The wide receiver had high expectations going into his first game with the Cardinals and thrived as the Bird Gang dropped the defending NFC champion San Francisco 49ers 24-20 on Sunday.

In total, Hopkins hauled in 14 passes for 151 yards on 16 targets. It’s eye-popping numbers, but where did he make the biggest impact?

This next drive is where it feels like he found a rhythm, making multiple catches on two separate drives to round out a strong first half.

These next two catches come right before halftime, resulting in a career-high 56-yard field goal from Zane Gonzalez to make it 13-10.

So Hopkins’ seventh reception sets up Gonzalez’s field goal. Nuk and Larry Fitzgerald are already on the same page as they waste next to no time getting set up for the spike. Hopkins gets tackled with 10 seconds left and the offense gets reset in eight seconds. That field goal wouldn’t have been the difference on the scoreboard, but the moment certainly shifted heading into halftime.

YOUNG FOOTBALL PLAYERS… watch Larry Fitzgerald on this play. That field goal opportunity happens because of him! #LarryBeingLarry pic.twitter.com/kQmu1jf1AO

This 1st down conversion is back-to-back completions from Murray to Hopkins and erases a 2nd and 17.

The Cardinals were deep in their own territory, and this catch helped extend a drive and play the field position game when it was still a grind-it-out type game for both teams.

This will be the highlight of the day for Hopkins. The near-touchdown was one of the few times Hopkins was able to break free in some open space. This reception, his career-high 14th of the day, set up Kenyan Drake’s go-ahead and eventual game-winning touchdown.

A career-high 14 catches for @DeandreHopkins in his @AZCardinals debut. #AZCardinals

The Arizona Cardinals had 12 passing 1st downs in the game. Hopkins converted nine of them. The wide receiver accounted for 65.7% of Kyler Murray’s passing yards on the day. ESPN’s Mina Kimes predicted Hopkins could help Murray in the intermediate passing game, and he certainly provided that in Week 1.

The Cardinals had a statement victory against the San Francisco 49ers on Sunday. They have expectations and met them in Week 1.

The former #1 overall pick has a #1 wide receiver. The duo put up these type of numbers after a far from traditional offseason and plenty of uncertainty heading into Week 1.

This is your warning: You’ve been put on notice, NFC.