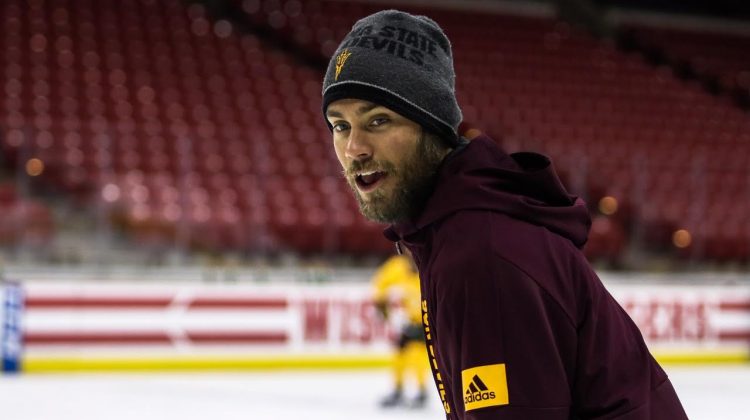 Spanning five seasons, Eddie Lack played 144 games as a goaltender in the National Hockey League, racking up 56 wins and a career .917 save percentage before officially retiring from the game this past March due to ongoing hip injuries.

Though his career wasn’t as long as planned, there might not be a bigger fan favorite than Lack was with the Vancouver Canucks, where he spent the majority of his NHL career and went 34-30-9 over the course of two years and started the first round of the 2015 Stanley Cup Playoffs.

Whether it’s his humor on social media, recording his first NHL shutout in his first home game at Rogers Arena, or doing his signature Lack dance (see video below), Vancouver loves Lack.

So, what’s the former Swedish goaltender up to now in retirement? He’s entering year two at Arizona State, serving as the Sun Devils volunteer goaltending coach for its Division I hockey program that is entering its fifth full season and sixth overall at the NCAA level. Lack is also juggling the coaching duties while working as a full-time real estate agent in Scottsdale.

Sports360AZ’s Andrew Bell caught up with Lack to discuss coaching and retirement life in the Grand Canyon State, his pro career, watching his old team in this year’s NHL postseason, and one of Lack’s hot takes on food.

*Author’s Note: Interview has been trimmed down for length and clarity.

Andrew Bell: You are entering your second season as a coach at ASU. What did you learn about being a coach as compared to being a player in your first year?

Eddie Lack: I think the biggest thing that I learned is to keep even keel. I think sometimes when you’re a player, you can become a little bit too riled up or get too high after games or when things are going well. I think the biggest thing I learned is that it’s just such a long season. You’re going to have to find a way to communicate that to your players and get the best out of them every single day.

AB: You have three goaltenders (junior Evan DeBrouwer, sophomore Justin Robbins, freshman Cole Brady) at ASU to work with who are all different types of players and sizes in net. Fundamentally, what has it been like picking your players brains and learning from them?

EL: It’s great. I think Evan’s season last year was better than we expected from him. I think he showed that he can take a big load of games out and play a lot of games in a row and play well. Just with his puck tracking and the way he battles, that’s what I really like about him. I really think he has a bright future ahead of him. Cole, I skated with him once and he’s a big guy. He moves well for a big guy and with him being a New Jersey Devils draft pick, we’re super pumped to have him in the program. Then I don’t want to forget about Justin Robbins. I think the short period of time he played last year, he played really well. They all have different styles. If I had one guy that I’d say has the best technique, I’d 100 percent say Justin Robbins because he’s so technically sound and his skating is out of this world. But he has a few other challenges being a shorter guy. He has to go out and challenge a little bit more. I try to just work with each guy and work with their strengths. I’m not trying to play three goalies the same way because they are different guys and different goalies. I try to coach with what I got.

AB: How would you describe yourself as a coach?

EL: I think what I liked the most when I played myself in my career was not trying to have everyone play the same way. I have some stuff with coaching them that I won’t compromise, but most of what I’m doing is just an ongoing discussion with them and what they’re feeling comfortable with. I try to see each guy as their own unique person and I’m trying to make that guy as good as I can.

AB: How have you molded in with Greg Powers and the rest of the ASU staff?

EL: I love this coaching staff. Not only do we think hockey the same way, but I think we get along extremely well off the ice and outside of the rink. That’s something that’s extremely important, especially when you are going to spend so much time together.

AB: Outside of hockey with retirement, your new real estate career, what brought you down that path and did you ever have thoughts when you were playing about that being the future for you?

EL: I love it here. With the weather and everything, I love the coaching gig that I have with ASU and I started about a year ago to start selling real estate. I am busy all the time, but that’s how I like it. I’ve always been interested in real estate more than investment and that’s kind of what my family has done back home in Sweden. So that kind of came naturally. I wanted to stay here. I didn’t want to move back to Sweden and live in the cold darkness again. It just felt like the right move for me.

AB: How did Arizona become a landing spot for you? What stood out about the state, and was there anywhere else you considered living after playing?

EL: When I was playing, my wife moved with me everywhere for about eight or nine years. I told her when I do retire, you get to pick where we live. We kind of looked at here or Florida, or California where it was warm. My wife had spent some time here before and once we took the step and got a place here, I’ve just loved every single minute of it. I’m also not a huge hurricane fan and I like that we don’t have too many natural disasters.

AB: Are there any adult hockey leagues that you’re playing in out here just for fun still to keep that competitive edge going?

EL: I sold my goalie pads the day after I retired, but I do play out now as a forward and I’ll play just to get some cardio and I’ll usually play at 5:45 in the morning. A couple weeks ago, I actually lost my first tooth on a high stick. That was pretty funny. I’m finally a part of the Spittin Chiclets cast.

AB: Your old team in Vancouver went on a postseason run to the Western Conference semis this summer. With former teammates like Jacob Markstrom, Alex Edler, and Chris Tanev on the roster, how much did you keep up with the action, if at all?

EL: It was great. I really think that Vancouver is going somewhere with the way they’ve had a rebuild and it’s kind of happened quicker than anyone thought. They have a really young, exciting team and they are really going to be dangerous for the next 5-10 years I think. I love it there. That’s where I played my best hockey and we loved living there. Vancouver has a special place in my heart.

AB: A less-serious question. You have a great social media following with Canuck and hockey fans alike and are very active on Twitter. But one of your recent tweets, ketchup on spaghetti. Where does this come from?

EL: (Laughs) Ketchup on spaghetti is more a European thing I think. We don’t put it on all spaghetti but you have pasta with a tomato-based meat sauce. The ketchup is supposed to be a tomato too, right? I grew up with it so it kind of just makes sense. But social media is just something that I’ve tried to have fun with throughout my career. I just try to show myself to the broader public and show my life and what I’m doing and put out some funny stuff.

Ok I’ll see myself out

AB: Stepping out of the game, what do you think is the biggest area you’ve grown as a person?

EL: I just think growing up and having a normal job. There’s so much time that I have to put into it to be successful and what I’m taking with me from hockey is basically that whatever I put my mind to, I know I am going to be successful. That’s kind of what I’ve learned throughout this pandemic and everything, too. There’s always things that you can do to better yourself and if it’s not becoming a better hockey coach or a better real estate agent, it’s about becoming a better person. That’s what I’ve figured out throughout this whole mess.