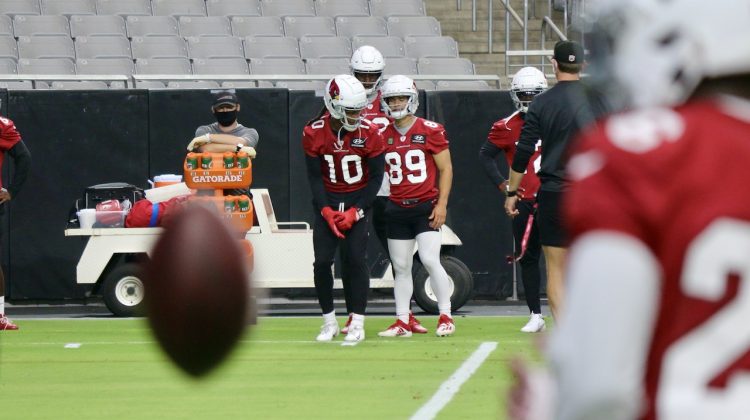 The Arizona Cardinals are continuing to push through their preseason training as Week 1 of the NFL season is just two weeks away.

On Friday, the team returned to the field after the Cardinals canceled all team activities on Thursday to reflect after Jacob Blake was killed by police in Kenosha, Wisconsin on Thursday.

The next steps to protest and build a better community were on the front of players’ minds today as they returned to the field as well.

“We talked about a number of things as players, some of the leaders on the team,” Cardinals defensive lineman Corey Peters said. “I’m happy that the organization has decided to be proactive and to try to provide opportunities for us to discuss these issues and be sensitive to them. Moving forward, it’s going to be kind of a joint task between some of the leaders on the team and just kind of figuring out different things that we want to do to the issues that are important to us. Obviously it’s a heavy period of time. A lot of us are are feeling isolated being in training camp and spending a lot of time in meetings and not really connected to the outside world, but these issues are really heavy on our hearts and so it’s something that we spent a lot of time talking about outside of actual football.”

For some players, mentally working through what has transpired over the past months can be difficult while trying to maintain a high rate of play on the field.

“It’s real tough because there are so many parts, so many counterparts, that’s going on at the same time,” Cardinals offensive tackle DJ Humphries said. “I can’t forget that I’m a husband, I can’t forget that I’m a black man, I can’t forget that I’m a father and then all at the same time I got to go out and be ready for the 49ers and be ready to go against (Chandler Jones) every day so it’s so tough being able to push things out of your head that’s going…with all the stuff that’s been going on in the world, being able to get the lock in for a few hours every day is almost like an outlet for me, one of the few moments everyday I get to (not think) about what’s going on in the outside world and kind of just honing to be ’74’ for a little while is a bit of a relief.”

On the field was an opportunity for a lot of the second and third team players to show what they can do in a game-like atmosphere. With no preseason games, game reps will be limited for the players fighting for final roster spots, so Kliff Kingsbury kept a keen eye on some of the non-starters throughout the day.

Former ASU Sun Devil and 7th round pick Eno Benjamin used the playing time to his advantage to rattle off a few long runs as well as a touchdown.

Follows this play with a touchdown run on the ensuing possession. pic.twitter.com/iOWMFljUC7

Moving forward, the Cardinals will have an off-day on Saturday before getting back to the field Sunday afternoon.