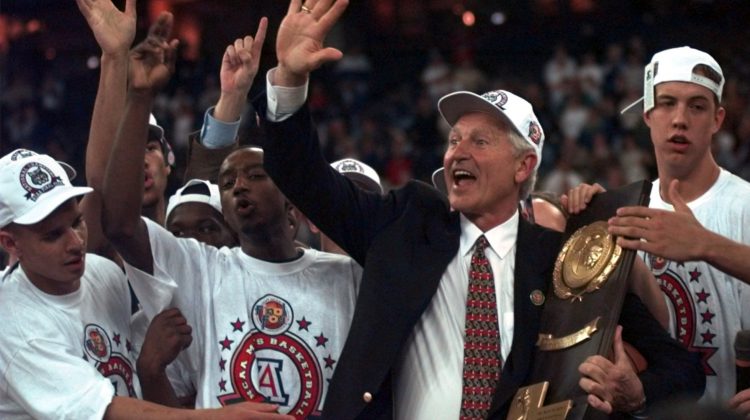 It was late October, 2008, and Lute Olson had just resigned as the University of Arizona’s basketball coach. His departure was messy, hardly befitting a man who belongs on the Mount Rushmore of Arizona sports.

At the time, I was the sports columnist for the East Valley Tribune. I knew I needed to write something about Olson. After collecting my thoughts, I started the column with these four paragraphs:

Its only victories were over Florida International, Northern Arizona University, San Diego State and Stanford.

Lute Olson was hired 17 days after the season ended. Two years later, he led the Wildcats to their first of 24 straight NCAA Tournament appearances.

I can’t say I got to know Olson well in my 38 years as a sports journalist. I wrote about Valley sports. He was in Tucson. But over the course of those 38 years, I had occasion to travel down I-10 and write about the Wildcats. I also covered many of Arizona’s NCAA Tournament games, including, memorably, Arizona’s soul-crushing Elite Eight loss to Illinois in 2005.

I was around Olson enough, I think, to say this confidently: He has been as good a man as he was a coach.

And that’s saying something.

Olson’s quarter-century run at Arizona should be remembered as one of the greatest coaching jobs in college basketball. In addition to those 24 straight NCAA Tournament berths, Olson made five Final Four appearances, one with Iowa and four with Arizona. He won a national championship in 1997 – who can forget the sight of forward Bennett Davison mussing Olson’s hair after the Wildcats beat North Carolina – and finished with a career record of 780-280.

In all, Olson had 46 NCAA Tournament wins, just one behind John Wooden and one ahead of Bob Knight.

“He put the state of Arizona on the college basketball map,” Frieder told me.

Olson did all that, somehow, in a city that rarely produced elite high school basketball players. You know how many Tucson products received scholarship offers from Olson during his tenure? Two: Sean Elliott in 1985 and Deron Johnson in 1989.

Steve Kerr was the Phoenix Suns’ general manager when Olson resigned. I asked Kerr, who played at UA from 1983 to 1988, to summarize what Olson had done as the Wildcats’ coach.

“It is incredible when you think about where the program was and what it became over an extended period of time,” Kerr told me. “No one has matched what he did. A lot of coaches had great runs, but nobody sustained a 25-year run like that, particularly when we’re talking about taking over a program at the bottom.”

But it wasn’t Olson’s coaching chops that convinced Kerr to play college basketball in Tucson. Instead, he told me a story.

“I went with my mom to a banquet in Los Angeles after my senior year in high school, and Lute was speaking,” Kerr said. “I remember my mom saying, ‘That’s exactly the type of man I want you to play for.’ He cast such an amazing presence.”

Legends don’t live forever. But their legacies do.

Lute Olson won a lot of basketball games. But he will be remembered just as much – and rightly so – for the way he lived his life.

We should all be so fortunate to have that said about us.