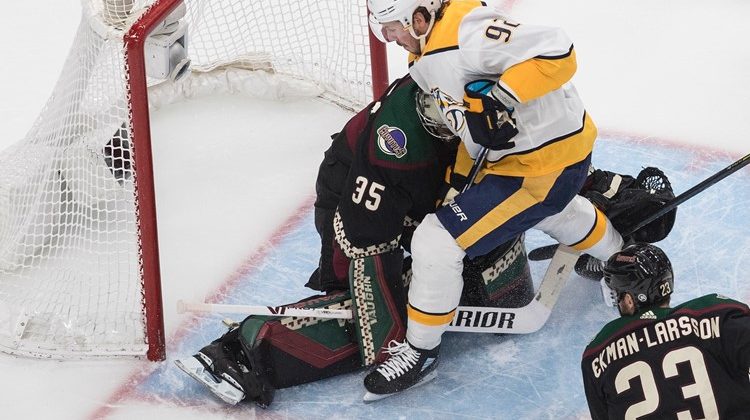 Sure enough, the netminder nicknamed “Kuemps”  answered the bell when his team needed it most. Tied 1-1 in the Stanley Cup Qualifier and with backup goaltender Antti Raanta deemed “unfit to play” after an incident in warm-ups of game two, Kuemper made 39 saves on 40 shots in game three.

He particularly stood out in the first period, at one point keeping the game scoreless while the Preds were outshooting the Coyotes 11-1. His play early, and late in the game paved the way for an eventual 4-1 victory.

“Kuemps, he’s a great goalie. I didn’t know much about him before I got traded here,” said forward Taylor Hall, who added the Coyotes third goal of the game. “…But to see his level of compete and how he plays in practice, he’s so in control, he’s so big, and he covers a lot of the net. If we can let him see pucks and take that first shot, he’s one of the best in the world at it. He’s a big reason we won today…He’s playing like our best player right now.”

One of the strengths of the Coyotes going into this year’s postseason was their tandem in net. Prior to the league shutdown, the duo of Kuemper and Raanta were both top-10 in save percentage.

“Especially now, you need two excellent goalies. We have that,” said Tocchet during training camp about Kuemper and Raanta. “With what’s been going on, the way the format is, and what’s been thrown at us. If you’re going to go all the way, you need two goalies.”

Injuries have hurt the Coyotes between the pipes for each of the last two seasons, and that strength in net was suddenly tested again when Raanta was out on the second end of a back-to-back on Wednesday.

What was thought to be a possible Raanta start in game three turned into a quick turnaround for Kuemper, who missed a little over two months from December to February with a lower body injury during the regular season.

Normally, playing a goaltender on back-to-back nights in the NHL, there is some sort of travel involved that could bring more fatigue. In the unique case of the 2020 postseason, Kuemper got to stay in the same city and have close confines to return to the rink.

Similar to his coach’s sentiments, Kuemper stayed even keel and shouldered a heavy workload en route to Wednesday’s victory. Between the six goalies who have played in three postseason games thus far, Kuemper leads the pack in saves (103) and save percentage (.928).

Darcy Kuemper, we are not worthy. 👑 pic.twitter.com/3tEG9WzMZ6

Once again after the game, Tocchet wasn’t too overly enthusiastic about his netminder. It’s what he’s come to expect, and now his goalie is showcasing himself in the spotlight of a postseason series. The Coyotes are one win away from earning their first postseason series win in eight years, and Kuemper is at the forefront of that effort thus far.

“Kuemps has been like that for two years,” said Tocchet when asked about his netminder’s outing. “Nothing fazes him. Throughout the years I’ve played, you always have those goalies that everyone wants to play for because he’s such a great guy and never blames his teammates. Those are the guys that you want to block shots and play for. Kuemps is that type of guy.”