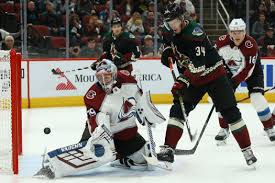 The Arizona Coyotes will be meeting the Colorado Avalanche in the next round of the Stanley Cup Playoffs.

After taking down the Nashville Predators in four games of the Stanley Cup Qualifiers, the Yotes now get to deal with some of the Avs top stars, including Cale Makar, Gabriel Landeskog, and Nathan MacKinnon. They’ll hope to bring their tight-knit, defensive brand of hockey into the series.

“Game planning and our team sticking to our game plan is paramount,” Tocchet said of the matchup. “We have a lot of guys that play the same way and we have to play the game plan the right way…We can’t freelance. Some other teams can freelance and win hockey games, we can’t. We need 1 through 21 to buy in to what we are doing to have a chance against these types of teams…If we can stick to it, we can be dangerous.”

It’s no secret that MacKinnon is world class. A No. 1 overall pick in the 2013 NHL Draft, the Halifax, Nova Scotia native won the Calder Memorial Trophy as Rookie of The Year in 2013-14. This season, he was fifth in the league with 93 points prior to the regular season being postponed in March.

MacKinnon has put up 30-plus goals and over 90 points in each of the last three seasons, and has finished in the top-10 for Hart Trophy MVP votes in the last two years. He is in the running once more in 2020.

Furthermore, Makar was seventh in points among defensemen in the regular season. Thus, goaltender Darcy Kuemper and the Coyotes will have a tall task at hand while trying to limit time and space against some of the most skilled players in the world.

As one of the top four seeds in the west, the Avs didn’t compete in a play-in series. Rather, they played round-robin games against the three other top seeds.

Colorado went 2-1 in that span to finish as second in the Western Conference. They held the third best record in the league when the season got put on pause in March. The Coyotes were 1-0-1 against the Avalanche in the regular season, and now will have their shot at them in a best-of-seven.

“Obviously, you can see their skill. They have it throughout their entire lineup, but they defend extremely hard too,” said Coyotes forward Derek Stepan of the matchup. “They are one of the best teams at defending and they have shot blockers. We certainly have our hands full and this is one of the best teams in the NHL so we better be ready to play.”