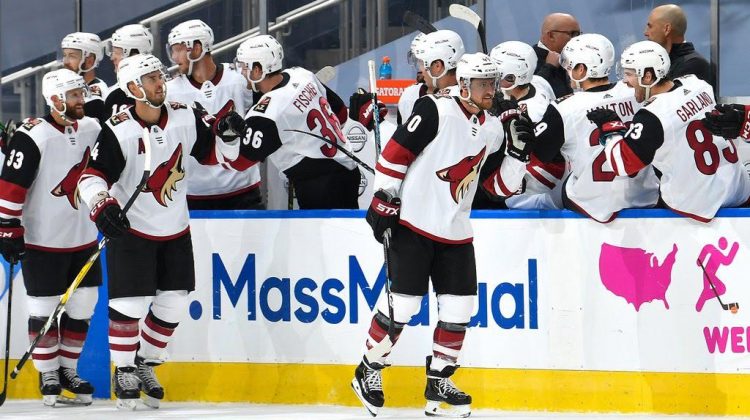 Arizona Coyotes forward Michael Grabner wasn’t even sure he was going to play in this season’s Stanley Cup Playoffs.

He was still weighing the decision to opt out a few days prior to when the team was supposed to return in July. Add in a gruesome eye injury that he’s been dealing with since 2018 and that he’s been scratched for parts of the 2019-20 regular season, and it’s easy to see why he might have made that decision.

However, Grabner ultimately elected to play, and the fruits of his labor came full-circle in game one of the Coyotes Stanley Cup Qualifier against the Nashville Predators on Sunday morning.

Grabner had a beautiful short-handed deke and back-handed shot while on a breakaway that he put past Predators goaltender Juuse Saros, eventually turning into the 4-3 game-winner for a franchise that hasn’t earned a postseason victory since 2012.

“The puck was actually rolling a little bit so I had to switch what I was going to do. I was going to shoot,” said Grabner of his game-winning move on the breakaway. “I had to change my mind and it probably helped me to be honest. I’m glad it worked out in the end.”

Coyotes coach Rick Tocchet had nothing but praise for Grabner’s efforts, and he knows the resilient type of player he’s been, between bouncing in-and-out of the lineup and the eye injury that he’s dealt with.

“Grabs is a pro. He didn’t know if he was going to come until the last minute and with his eye injury, it’s a tough injury for him,” said Tocchet of Grabner. “He’s just a great guy and that’s a huge goal for us. He’s ready, whether he plays one shift or he plays or he doesn’t, he’s the ultimate team guy. The one thing I just feel bad about is the eye injury. It’s just a tough one for him but he came through. I can’t imagine basically playing with one eye.”

Aside from Grabner, the Coyotes stars helped pave the way for a Sunday win. Clayton Keller, Oliver Ekman-Larsson, and Christian Dvorak had goals, and Phil Kessel and Taylor Hall had two points apiece, with the stars stepping up to put up three goals in the first period. Goaltender Darcy Kuemper also added in 40 saves.

It ultimately led to the franchise’s first playoff win in eight years. From Grabner to the star forwards, it was a full team victory, and it was one of 19 wins that the team is hoping to acquire over the next few months.

“You got to handle pressure by going after the pressure,” Tocchet said. “…We can’t have passengers. This team, we can’t afford to have four, five, or six guys not have their game. We need everybody to play and those guys brought it to a different level and that’s nice to see.”