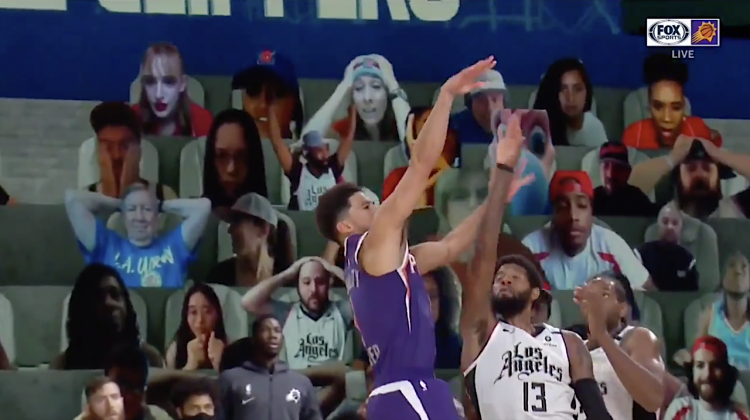 The Phoenix Suns had the odds stacked against them as they entered the NBA bubble. They barely snuck into the 22-team field in Florida, and three games in, they still have plenty of work to do to make the postseason.

However, few, if any, expected the team’s first three games go the way they have. The Suns had a very complete win over the Washington Wizards in their first game back from a hiatus. The second unit surged a comeback against the Mavericks in Game 2. Against the Clippers, one of the NBA’s best teams, the Suns led for much of the game and a Devin Booker buzzer-beater helped push Phoenix over the edge.

All of the sudden, the Suns are within a game of ninth place and could find themselves in a play-in game if things continue on a positive trajectory.

It’s a huge win when looking at it strictly from a standings standpoint, but head coach Monty Williams saw a young team maturing before his very eyes on Tuesday.

“Our guys just grew up tonight to play against a team that possibly could win a championship,” Williams said after the win. “They sent everything at us with (Paul George), (Kawhi Leonard) and physicality. Our guys took it and we put ourselves in a position to get a win.”

Specifically, the Clippers threw much of that firepower at Booker, and the Suns leader came away with 35 points, four rebounds and eight assists. People will remember the shot that ended the game, but all four quarters of Booker’s performance was impressive. When it mattered most, the Suns’ star stepped up, scoring eight points in the final five minutes of the game.

“Coming into the bubble overall, we said we want to make some noise,” Booker said. “We want to be that under-the-radar team that just comes in and works hard and plays hard. That’s what we did tonight, so that just puts us in that situation to have a chance to win at the end of the game.”

While this win is a big one the Suns can build upon, Williams is quick to remind his team how much had to go right for the team to sneak into this bubble.

“We came into this thing with a level of gratefulness and humility that we were even in this,” Williams said. “We have got to hold on to that. We know that we’re not an upper echelon team consistently. These are the times where you have to manage your excitement and fun because that’s what the really good teams do.”

DEVIN BOOKER IN THE BUBBLE:

“I want a reputation in this league as being a winner,” Booker said. “Through five years, I haven’t got to that point in my career yet, but I’m working as hard as I can to get there, and I feel like this group has a bunch to do with it. A lot of guys in this locker room are locked in at all times and approaching the game with the right mindset, and that’s all you can ask for.”

There will be plenty of discussion about Booker’s place in the NBA stardom hierarchy leading up to the Suns’ next game against the Pacers, but Monty Williams echoed Booker’s – and the team’s – focus after their biggest win of their season.