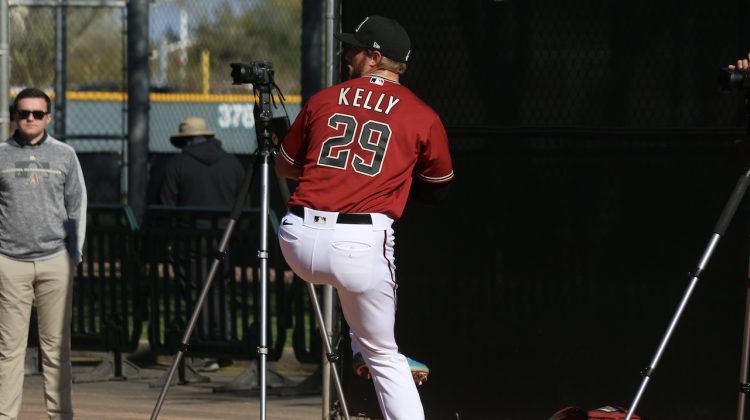 Go through the Diamondbacks’ starting rotation and there’s something intriguing about each one of these pitchers as the club makes it return to baseball.

Can Madison Bumgarner become the ace he was for the Giants in Arizona? Is all this hype surrounding a transformed Robbie Ray for real? What will a full (60-game) season of Zac Gallen look like? How will Luke Weaver respond getting back to a Major League mound after a long injury hiatus? Can Merrill Kelly stabilize what was an up-and-down rookie season?

None of these questions can be answered fully after one start, but we saw a glimpse of what this rotation can – or can’t – do this year.

Before the first game of the season, Torey Lovullo equated this 60-game sprint to a knockout, drag-out fight in the boxing ring, and his club needs to be ready to square up and throw some punches. While it’s safe to assume the Diamondbacks were not envisioning Madison Bumgarner to be the Mike Tyson, big swinging, high velocity starter he was on the Giants during three World Series runs, the lefty still can throw the punches necessary to get batters out.

For much of his start against San Diego, he was in control and the Padre bats were quiet. What got him, and many of the Diamondback starters, in trouble was not getting the low-pitch innings. The 3-2 counts added up until Eric Hosmer delivered the knockout punch, a three-run double and Bumgarner could not make it to six innings.

It was a rough ending to an otherwise solid debut, and the Diamondbacks should feel good about him leading the rotation.

Trimmed-down frame, quality salad underneath his hat, velocity up. What Robbie Ray showed in Summer Camp had the makings of a blockbuster season. But his first start of 2020 felt like a Saturday afternoon rerun. Ray struck out seven, but walked three and his pitch count jumped to 97 through 3.2 innings.

The Padres are 2-0. They worked 16 full counts tonight and chased Robbie Ray in the fourth inning after 97 pitches. Really.

Ray has been very candid about this season’s importance. A free agent at the end of the year, the southpaw could be a very hot commodity with an impressive abbreviated 2020. But Ray will need to shake the reputation of a high-strikeout, low-efficiency starter, and his debut didn’t do much to change that.

The optimist will say Zac Gallen worked efficiently with runners on base and dug in to only give up one run in his season debut. The pessimist will hone in on five walks and only being able to complete four innings of work.

The five walks jump out because Gallen had reached that mark only once since being traded to the Diamondbacks at the end of last July. He had plenty of outings where he didn’t go necessarily deep in the game last year, but that was more of a product of keeping his pitch limit low than not being efficient.

First inning was bumpy but Zac Gallen continues to be very good at getting out of those jams. We saw that in 2019.

That being said, he started the only game the Diamondbacks won in the opening series. The Padres could have blown that game wide open early on, but Gallen’s ability to make good pitches with runners on stifled the momentum swing in a series where it felt like all good juju resided in the home dugout.

Luke Weaver’s return to the rotation has to be toward the top of most intriguing storylines for this season’s Diamondback squad. The young starter was efficient as could be last year…when healthy. He missed the bulk of last year due to elbow tightness. The good news? The injury did not require Tommy John surgery.

The Diamondbacks believe he could be a big part of the rotation for years to come, and a healthy Luke Weaver is a top priority for the club. In his first start back he struggled, and that could be expected after such a long odyssey coming back to the mound and playing a confident Padres team.

Among a group that predominantly failed to get deep into games, Weaver’s exit was the earliest, failing to pitch four innings. He gave up six earned runs and called the start an “abomination.”

It wasn’t what he envisioned when he would return to the mound, but he’s healthy, and that’s step No. 1.

Man, did the Diamondbacks need Merrill Kelly’s performance on Tuesday.

Six innings of no-hit ball and he goes into the 8th inning on 104 pitches with seven strikeouts and one walk.

It was a chance for the bullpen to rest up a bit and a rare opportunity in which a starter was pitching with a significant lead.

Took this right before Merrill Kelly lost the no-hitter. What an outing in his first start of the year! 👏👏 #RattleOn pic.twitter.com/aIDr7BwLou

It also continues the sense of urgency Kelly has been pitching with since last year.

He was pitching for his job in the second half of 2019 and, at times, had strung together some of the best starts in the big leagues last year. He had to pitch for his spot in the rotation through spring training and Summer Camp and flat-out won the job.

That hasn’t changed as the games have started to count.

Kelly looks to be on another level in his second big league season. The big question will be if he can stay consistent over the next 10-15 starts throughout the year. But it’s a hell of a way to start 2020.

These guys are added into the group because a) they competed for rotation spots coming into the season and b) they pitched in innings typically thrown by starters. After early exits by Gallen and Weaver, both Young and Clarke came in and and combined for nearly six innings of scoreless baseball, being the bridges to the typical cast of characters in the bullpen.

T.J. McFarland was incredibly effective in this role in 2018. He could come in for four innings if a starter struggled or was hurt, or he could come in for a shorter outing later in the game. That bullpen chameleon was crucial to the team as they made their run at a potential postseason berth. Even if Young and Clarke don’t crack the rotation, they can provide Torey Lovullo the luxury of starter-quality pitching coming out of the bullpen.

These bridges seem especially important in a season where managers’ hooks may be tighter and the ramp up is shorter. Some starters just won’t be able to go as deep in games as they have in a usual season this early on. Having not one but two guys that could provide that safety net speaks to the starting pitching depth the club has, especially after Mike Leake opted out of this season.

At the end of the day, it was one start for most of these guys. It won’t define their 2020 seasons, but it does provide a glimpse of where the starters, and the club overall, stand.

Let’s see how the next go-around fares.