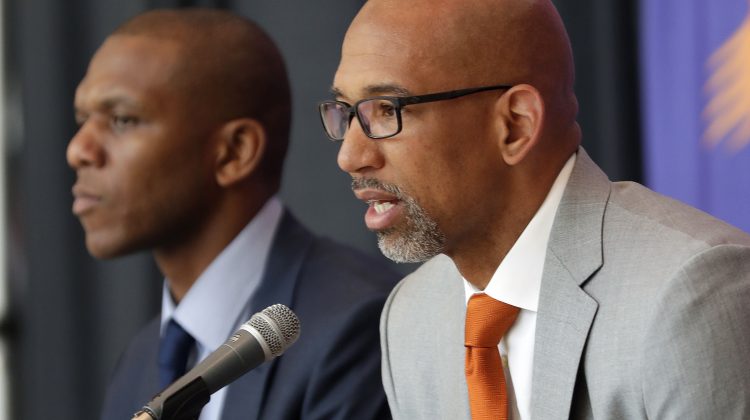 The Phoenix Suns face a tall task ahead of them as they head to Orlando for the completion of the 2020 season. They narrowly snuck into the group of 22 and currently have a less than 1% chance of making the postseason.

But that’s not stopping Monty Williams from trying to do the (near) impossible on the court. Don’t expect the Suns to walk onto the court at the end of the month donning mouse ears.

“We’re all highly competitive and we’re going down there to win games, I don’t know any other way I can say it,” Williams said on Wednesday. “We’re not going to ride on Space Mountain and do the Disney thing. This is freaking Braveheart and Gladiator stuff that we are trying to will onto other teams and that’s the mindset.”

Williams said the Suns have “embraced the hard” as the roster has gone through going pains and battled through the season predominantly shorthanded. Now, the team has a chance to head to Orlando healthy for the most part, with wing Kelly Oubre being the only notable player out do to injury.

The head coach believes this stint will also provide Devin Booker a big stage to show the nation where he stands in this league.

Devin Booker has a chance to become a LEGEND

The only players in NBA history to post multiple seasons of 26 PPG and 6 APG before turning 24:

“I think he wants to go to Orlando and cement himself as one of the better players in the league in a different way,” Williams said. “He made the All-Star team. I think he has his eyes set on All-NBA. And he’s more than capable.”

The Suns will also have another young guard in the backcourt in Orlando. The team recently signed Cameron Payne, who went one pick behind Booker and a pick ahead of Kelly Oubre in the 2015 NBA Draft. The point guard most recently played for the Texas Legends in the G-League, where he averaged 23.2 points, 8.1 assists, 4.9 rebounds in 15 games. Payne has played for the Oklahoma City Thunder, Chicago Bulls and Cleveland Cavaliers.

Phoenix now has four 2015 draft picks on their roster:

He also has a history with his new head coach. Williams and Payne were a part of the Thunder organization in 2015.

“I just feel like Cam is a guy that should probably be in the NBA. If you look at what he did in the G League and watched film on him, he’s got a burst.”

Williams is hopeful a change of scenery and playing with veteran guards like Ricky Rubio and Booker can help Payne find a spot in a crowded Suns backcourt.

“He’s still in that age group in his journey where he’s still learning and he’s been humbled. Sometimes you can grab guys like that and put them in a situation and they perform well and I’m hopeful.”

The remainder of the NBA season will be a sprint, and it’s easy to look past the first game on the schedule. The Suns will have little, if any, room for error to make it beyond the “regular season.” When asked about how many times he has watched film of the Suns’ upcoming opponents, Williams admitted “more times than I should,” but he knows the team can’t look past their first game against the Wizards.

“We obviously have a goal, which is to make the playoffs,” Williams said.

“I learned a long time ago you can’t skip steps. We’re dialing in today. being mindful of the workouts we have, giving guys a ton of information, reinforcing our language and vernacular, all the things we’ve emphasized with the goal in mind.”