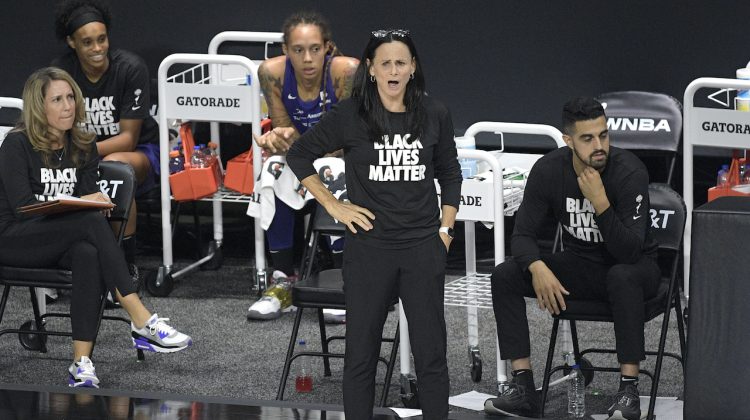 The WNBA, like every sports league in 2020, looked different on Saturday when it kicked off its shortened season.

There were no fans in attendance. The “home court advantage” dissipated as all teams are playing at the IMG Academy in Bradenton, Florida. The “benches” were spread out to multiple rows to maintain social distancing.

But the changes didn’t stop there.

Across the league, players wore Black Lives Matter shirts and their uniforms all donned Breonna Taylor’s name, a 26-year-old woman who was fatally shot on March 13 after three Louisville police officers executed a no-knock warrant and entered her apartment while she was asleep.

The players and coaches also participated in a 26-second moment of recognition for Taylor.

“We’re going to continue to use our voice and our platform to say the uncomfortable things and to speak out for what we’re passionate about,” Mercury guard Skylar Diggins-Smith said. “It’s great that we have a unified message in this and so many women are passionate about getting justice and bringing light to this story and this sad situation.”

Prior to the league’s first game, Layshia Clarendon and Breanna Stewart dedicated this WNBA season to Taylor.

“We just hope we make her family proud and do her justice this year.” – @SkyDigg4 pic.twitter.com/zrk8qvjNHT

The Phoenix Mercury are poised to have the talent to make a run at a WNBA title in 2020.

They have the league’s most prolific scorer in Diana Taurasi with Diggins-Smith, a four-time All-Star, joining her in the backcourt, as well as one of the most talented bigs in Britney Griner. Bria Hartley also looks to contribute to the backcourt after signing with the Mercury in February.

The only problem is…they haven’t played that much basketball together.

Obviously, that’s been a challenge with the coronavirus as the league has completely moved to the “Wubble,” but it rings especially true for the Mercury.

Taurasi only played six games last year with the team because of back issues. Diggins-Smith, who would need to adjust to a new team regardless, missed last season due to maternity leave.

It’s a lot to iron out while having to open up against the Los Angeles Sparks, who won Saturday’s season debut 99-76.

“It’s a process,” Diggins-Smith said. “It’s a great thing they aren’t handing out trophies today. It’s a long season. At the same time, this season is fast so you’ve got to be able to learn the lessons from this game and learn the lessons to get ready for the next opponent.”

While there will be a bit of a transition for the Mercury’s roster this season, the team hung with the Sparks in the first two quarters, heading into halftime trailing 50-46.

But the third quarter is where the game turned, as Los Angeles outscored Phoenix 30-8 and cruised to an easy win. The Sparks, who have had continuity with their core players over the years, showed that chemistry in the second half.

“It’s literally the first time all 10 of us have been on the court together with injuries and nicks in training camp,” Taurasi said.

“We have a long way to go. Obviously, LA played great today, taking nothing away from what they did. They’re an experienced and really talented group. They punched us in the face today and we didn’t react the way we need to if we want to compete.”

Day 1 did not go as planned for the Mercury, but now their focus must shift on their remaining 21 regular-season games.

“It’s not about a loss, it’s about a lesson that we learned today,” Mercury head coach Sandy Brondello said. “Maybe this is going to be the best thing to happen for us because we’re going to go back and watch film, work on it and we know it’s happening right now and not at the end of the year.”

Nneka Ogwumike led the Sparks with 21 points on a perfect 8/8 from the field. Taurasi was the leading scorer for the Mercury with 16 points.

The Mercury will take on the Indiana Fever on Wednesday at 4 p.m..