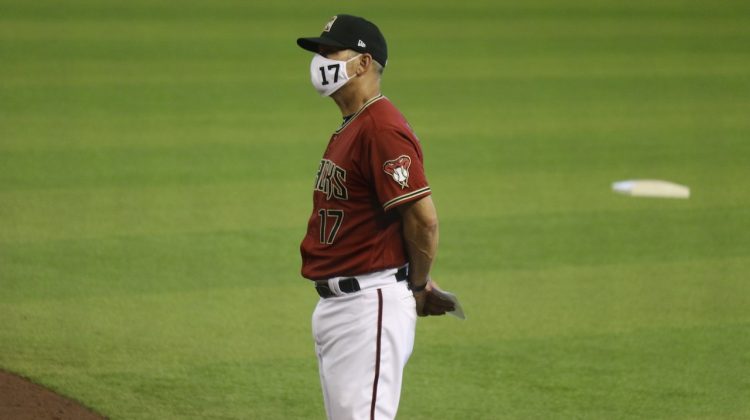 Fourth of July weekend was going to be a big one for the Arizona Diamondbacks.

Independence Day weekend usually signals a turning point in the MLB season. It’s the last sprint to gain some momentum before the All-Star break, as the long grind of a 162-game season shows the first glimmers of a light at the end of the tunnel. With key additions on top of a solid foundation, the Diamondbacks were perceived to be a contender in the National League West after nearly missing the postseason the past two years.

That can still be the case, but it’s just….different.

Instead of this big push for the second half, the club used July 3 to congregate for its first workout since the MLB season – and all of sports – went on hold due to the coronavirus pandemic.

“I think we’re going to ramp up into activity pretty quickly,” Diamondbacks general manager Mike Hazen said. “My sense is that we’re going to start playing games in short order and we’ll be able to bring the Salt River squad over. What those games look like depending on where the pitching is at is going to dictate everything.”

Sure, the pitching will dictate a lot, but COVID-19 – and the league’s ability to limit the virus’ spread – will truly dictate everything.

It seems as though the league won round one against the coronavirus. On Friday, the league reported 38 positive cases among the 3,185 tests administered – 1.2% positive – well below the national average.

While those numbers are strong, that’s the first of many literal and figurative tests MLB will need to pass over the next few months, and the league’s diligence can’t wane.

“It’ll be encouraging if we can keep that to that level, and it’s going to be on all of us to do our best to do that,” Hazen said. “That means just because we got through the quarantine, just because we pass…multiple tests, doesn’t mean that behaviors can go back to normal.”

In some ways, the first day back was a return to normal: Pitchers threw bullpens, position players took batting practice, and the camaraderie quickly picked up where it left off three months ago, albeit from a distance.

But there were many wrinkles throughout the day that reminded everyone in the building that this season is far from normal.

Every team representative was tested on their way into the stadium. Coaches wore masks while on the field and everyone on the field looked to maintain six feet of distance from each other when possible. The players were split between the home and visitor clubhouses to help maintain social distancing. The changes were evident but necessary for reliever Archie Bradley.

“I think it’s all to help us play and keep us safe,” Bradley said. “Baseball is sort of small in the world with what’s going on, but if we can do our part and stay safe to get back somewhat of a normal for us, then we’re ready and willing to do whatever we need to do.”

Manager Torey Lovullo donned a mask with a Diamondbacks logo on one cheek and a #17 on his other. In three years with the Diamondbacks, he has built a rapport with his players through an honest, personal touch. That can create some issues in a world where the new normal is interactions from six feet apart. While Lovullo will learn and adjust to follow health protocols, his approach won’t change.

“I believe in the art of communication and building a bond with those guys,” Lovullo said. “I’m going to wear my mask as much as I possibly can when I’m here at the stadium, on the field and in the dugout. It’s not going to hinder me from going out and communicating and wandering and establishing those bonds and making those relationships.”

Now comes the tightrope of being mindful enough of an unprecedented pandemic to maintain health protocols but not let it affect on-field production. The players had a quick taste of the 2020 season in February and March, but it was quickly derailed before exhibition games really got going in spring training.

Players were forced to work out on their own and maintain peak readiness should they get the call to report quickly. For first baseman Christian Walker, who is heading into his second season with an expanded role, it was staying sharp physically by integrating pilates into his training regimen and remaining mentally prepared.

“I was comparing it to a rain delay or rain out,” Walker said. “The second you think, ‘Oh, we’re not going to play,’ there will be a season. For me, I was staying ready, I was trying to stay in shape. I was trying to get in better shape. I feel like everyone was having a similar mindset seeing everybody after day 1.”

Typically, the team’s focus is to dominate opponents the second they walk on the field, and it’s no different with an opponent they can’t see. Priority one is making sure the virus doesn’t even sniff Chase Field, but they also have to teeter between a quick ramp-up to perform in three weeks when the regular season kicks off and making sure the roster’s health can be sustained through a 60-game sprint.

“Everyone’s focused on infectious disease, but it is our responsibility to be mindful of soft tissue, legs, arms, backs, everything else,” Hazen said. “Let’s make sure in the first couple days we get our arms around exactly where guys are physically.”

The proverbial rain delay knocked out the majority of the 2020 MLB season, and there may be more storms ahead. But with day 1 in the books for the Diamondbacks, the sun is peeking through.