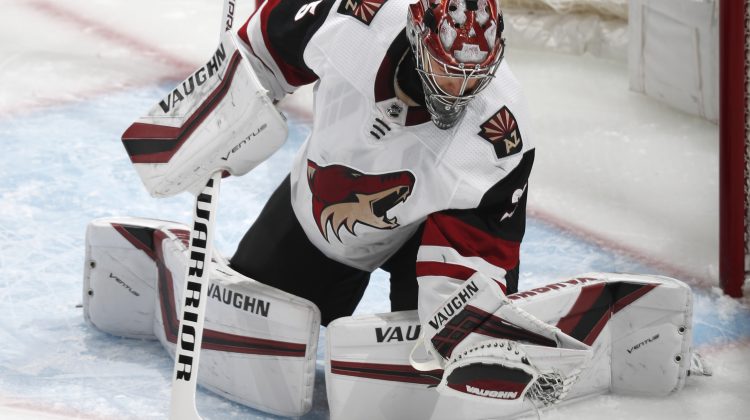 Morning arrivals, empty arenas, and the sound of skates, sticks, and chirps echoing through the walls of a hockey rink.

The characteristics listed above are what games in the National Hockey League will look and sound like over the next few months. No roaring fans, no goal chants, and no howls scattering throughout Gila River Arena.

Rather, for players who are accustomed to playing in sold out venues at this point in their careers, the next games that they step on the ice for will be similar to a simpler time in their hockey lives, when they were  young kids showing up to lace up their skates with no one around.

“It’s like when your mom would drop you off at practice at 7 a.m. on the weekends,” said Coyotes forward Taylor Hall. “There’s not a lot of energy but we’ve all done it before. We’ve all skated in front of no fans during the summer…It’s one of those things that once you get used to it, you won’t notice it anymore.”

Hall and the rest of the Arizona Coyotes are gearing up for the NHL’s return to play. The Coyotes are set to take on the Nashville Predators in a best-of-five play-in series beginning on Aug. 2 in Edmonton with no fans. Monday marked the beginning of training camp.

Amid the Coronavirus pandemic, players seemed more than enthused to be back playing the game they love, even if it means making a few sacrifices like staying in a bubble and not going anywhere else for an extended period of time in Edmonton.

Hall identified that unique opportunity to play during the middle of a pandemic as himself and goaltender Darcy Kuemper spoke to the media after Monday’s training camp via a Zoom call.

“Just enjoy it. I think there might be teams that don’t embrace it as much as they should,” Hall said. “If we can buy into the fact that there are going to be some lonely days or there might be some days where you want to see your family or your friends or whatever it is. At the end of the day, we are competing for a Stanley Cup. We are going to do whatever is necessary and I think it’s going to be a lot of fun.”

Although other players have opted out of playing in the postseason, no one on the Coyotes roster has elected not to play. The deadline to opt out was on Monday afternoon.

Thus, it seems the Yotes have their group together and healthy as they ramp up for a departure to Edmonton in a couple weeks.

Coach Rick Tocchet praised his team for Monday’s first day of training camp, saying they were ahead of schedule compared to where he thought they’d be. They’ll look to find their stride with a fresh start lying ahead of them going into the Nashville series.

“It’s kind of about building your own energy. That’s going to be really important and whatever team can rally around the situation, it’s going to be big,” Kuemper said. “…I think it’s just going to be about buying in and embracing the situation and going out there and just playing hockey. It will be kind of fun going back to the rawest form of the game. That’s basically what’s happening. It’s different, but you have to make the most of it.”