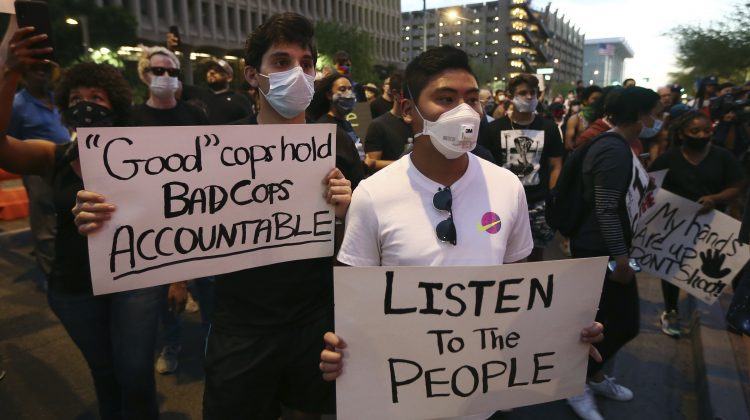 George Floyd’s senseless killing one week ago has caused a firestorm and triggered violent and destructive outbreaks throughout the country.

For Super Bowl Champion linebacker and former Arizona Cardinal standout Seth Joyner, he believes progress can only be achieved if open dialogue amongst all parties is initiated.

Joyner, a Valley resident who also does analyst work for the Philadelphia Eagles, believes without conversation, there is no resolution and that’s part of the issue that we’re all encountering today.

I’m still outraged and sick about the video, image and murder of #georgefloyd I’ve been silently contemplating my thoughts, emotions and words! Because I needed the guidance of the Holy Spirit instead of speaking… https://t.co/a5OnQaTvcR

He said one of the most important things he did since the killing is taken the proper time to reflect on the entire situation through his faith without jumping to any conclusions or speaking out prematurely.

When Joyner did decide to speak, his words have been powerful.

“In some ways I feel like this country is at civil war from within,” he explained to Cesmat. “There are some things going on that the natural eye cannot see and that we don’t understand. When we’re driven by emotion and we’re driven by anger – we’re blind and our hearing is dull…until we bring that back to center…the circumstances and how they are are going to continue.”

Joyner believes we are “destroying ourselves from within” and believes not only sports, but the athletes themselves can express their viewpoints in a positive way if some of the major networks would be more proactive and give them that platform to help further educate young people, most specifically.

He also feels, we as Americans, are slowly losing our freedom within this country and the situation will likely get worse before it gets better.

“Systematically, our freedoms and our abilities to do things and enjoy The Constitution that gives us those freedoms are slowly but surely being snatched away from us,” Joyner continued. “Because we’re so angry and so emotional about everything that’s going on, we can’t even see it. I just don’t know how we move past this unless people become level-headed in their thinking and bring their emotions down.”