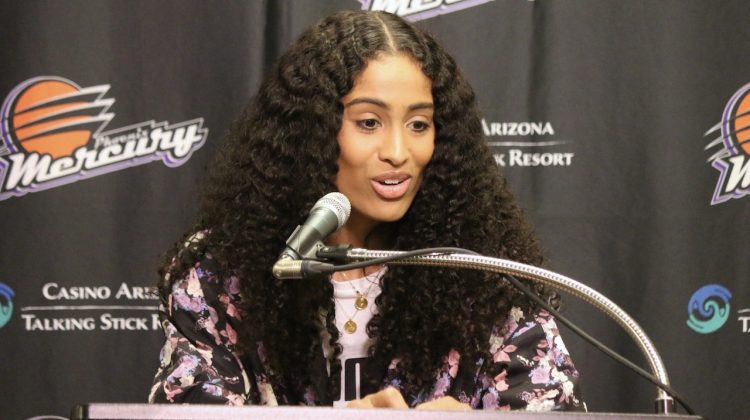 Skylar Diggins-Smith has been waiting a long time to get back on the basketball court. The Phoenix Mercury point guard sat out of the 2019 season to have her first child while she was with the Dallas Wings.

Now, she’ll have to wait a bit longer than anticipated after the WNBA announced they will postpone the start of their season on Friday due to COVID-19.

Diggins-Smith joined LaChina Robinson on an Instagram Live interview through the NBA’s account on Wednesday to discuss how her family is dealing with social distancing while preparing for the upcoming season. While the seven-year veteran is eager to return to the court, the self-described “homebody” values the time she gets in her family of three.

“My husband and I, we don’t have a nanny…(my son) is either with my husband or he’s with me,” Diggins-Smith said. “That’s been our schedule anyway, so it wasn’t like he was going to daycare anyway or anything like that…It’s great to have this time to spend with him, obviously, and as a family. I don’t take these moments for granted. You have to find the good in this situation.”

The Boss Baby is a dope show😂

The best of @SkyDigg4’s IG live session, in a thread: pic.twitter.com/uVq7GXusi9

She said the biggest challenge for preparing for the upcoming season has been getting creative in her conditioning now that gyms are closed.

“It’s challenged me because I was in my feelings about it, not being able to be on the floor because I’m such a routine woman…Especially since I’ve had my son. We are on such a tight schedule.”

But getting creative will help distinguish the top players and teams whenever the league starts its 2020 season.

“This is going to separate people right here,” Diggins-Smith said. “This is the great equalizer as far as this pause because most of the gyms are going to be closed…Who’s hungry enough to have that discipline to commit to the work ethic it takes to be ready for the season?”

While she may have been away from the court for the 2019 season, that doesn’t mean she wasn’t making an impact on the game and the league.

During the offseason, she got back on the court with Team USA basketball, she was ready to play both mentally and physically.

“It felt good because I had so much uncertainty because I was struggling with my self-confidence a little bit with what I was going through,” Diggins-Smith said.

“I didn’t really know where I was at. I felt like I was just jumping in. I had been working out but it’s just above the neck that I had to get over with for the most part.”

Throw up the ✖️ if your team just officially added @SkyDigg4 to the family!

Whenever the WNBA returns, Diggins-Smith is ready to team up with Diana Taurasi, Brittney Griner and another deep Mercury squad. The trio shared time working out with Team USA, and Diggins-Smith looks forward to learn from both of them as Phoenix makes a push for another WNBA title.

“I’ve had many conversations with ‘D’. The first thing she told me was ‘You need to act like you’ve been here before,’” Diggins-Smith said. “Nobody’s doing me a favor. I’m going out there to win, to compete for a championship, just like everybody else…I’m trying to learn but I want to be a leader, too.”

The full interview between Diggins-Smith and Robinson is below: