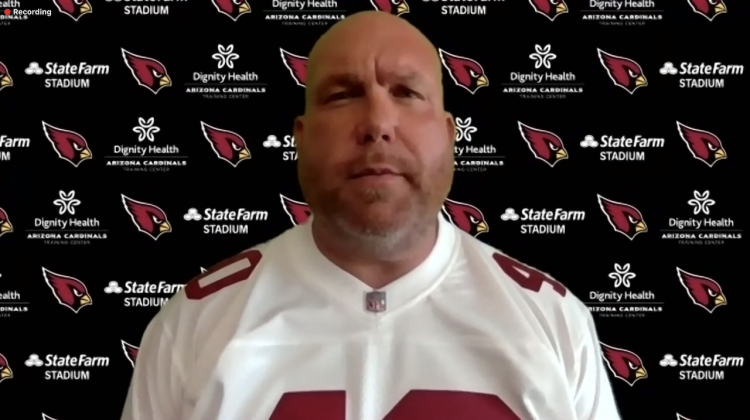 That’s the question Steve Keim has to prepare for over the next eight days.

The Cardinals are in an interesting spot in the NFL Draft. They are high enough in the draft order that there are plenty of intriguing options for them to pursue. They also aren’t high enough to have a clear road map on who will be available at that pick.

The Bird Gang could certainly go the defensive route with multiple defensive linemen like Derrick Brown or Javon Kinlaw slated to be early to mid-first round selections. Clemson Swiss Army Knife Isaiah Simmons might be there as well. Kliff Kingsbury could lean into the high-flying offense route and take advantage of Larry Fitzgerald’s guidance for CeeDee Lamb, Jerry Jeudy or Henry Ruggs.

With just six picks and no second round pick in this year’s draft, Keim could look to trade down.

Perhaps the most common potential strategy to go offensive lineman after trading for wide receiver DeAndre Hopkins earlier this offseason.

Tristan Wirfs had more true pass-blocking snaps than any other top OT in the NFL Draft. pic.twitter.com/u50tWGw6Dg

“They’re all fun to watch, I can tell you that,” Keim said. “Andrew Thomas is a guy, probably one of the best pass protectors. You’ve got Becton, who’s freakish and…gives you that wow factor. Wirfs has tremendous upside athletically, does things out in space that are amazing. You’d like to think that he’s just going to continue to get better and better. (Wills) can play guard, he can play tackle. He’s tough, he’s nasty, so the guys bring so many different things to the table that you can get excited about.”

While this group has been the top echelon in this year’s class, Keim wouldn’t disclose who he thought the top option was.

“At the end of the day, I think that all four of them are going to be good players, and you just have to determine who fits what you do best.”

The group with the least consensus: Top offensive tackles. It’s Tristan Wirfs (Iowa), Jedrick Wills (Bama), Andrew Thomas (Georgia) and Mekhi Becton (Louisville) as the top 4, but no one has the same order. Thomas may be the “safest,” while Becton has the most potential.

The Cardinals already invested in D.J. Humphries this offseason to man the left tackle position for the next few years. While using such a high pick on a tackle typically equates to covering the the quarterback’s blindside, Keim said book-ending the line with quality talent on the right side provides immense value. He pointed to new defensive schemes that are now flipping elite pass rushers at defensive end and outside linebacker to create matchup issues with the right side of the line.

“You can’t get pigeonholed and say ‘He can only play left or right tackle,” Keim said. “You want guys to have position flexibility as well as a scheme that supports that. There’s some of these tackles, there all different in this draft…Some are a little more physical, some are better pass protectors. A couple of them can play inside and outside, a couple of them can play left tackle and right tackle so they’ve been a lot of fun to evaluate.”

Thomas, Wirfs and Becton all played at both tackle positions in their college careers. Wills was exclusively a right tackle, protecting Tua Tagovailoa’s blindside in the 2018 & 2019 seasons.

With (at least) three potential quarterbacks being taken before the Cardinals make their pick and defensive blue chips Chase Young and Jeff Okudah projected to go in the first three picks, Keim should have options if they want to address the offensive line.

He has a little over a week to figure out that fit.