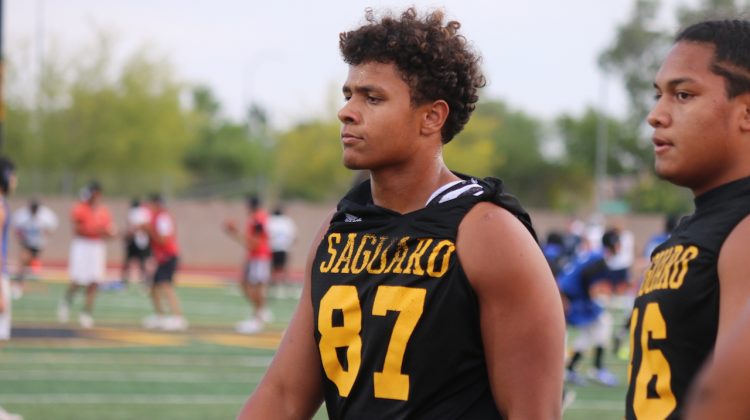 The top eight is set for Saguaro defensive end Quintin Somerville. Long considered the top player in the state, the 6-foot-3, 238-pound playmaker holds over 20 offers.

We’ll break down each school and provide some quotes on a few of those schools from Somerville when he was at the Under Armour Combine a few weeks ago.

The Bulldogs were a big offer and visit for Somerville. Georgia already earned a commitment last class from Somerville’s teammate and top 2020 cornerback in the country Kelee Ringo.

“Georgia was a spectacular visit, best I’ve ever been on,” Somerville said. “I’ll definitely be taking an (official visit) out there.”

The Huskies have recruited Arizona, and Saguaro, incredibly well over recent years, earning commitments from now-Arizona Cardinal defensive back Byron Murphy in the class of 2016 and Jacobe Covington in this most recent class. Washington has done an impressive job recruiting and developing defensive linemen over the years.

Somerville is also excited at the prospect of playing next to a top 2020 defensive line signee with U-Dub.

“Having the opportunity to play next to somebody like Sav’ell Smalls obviously would make me a better person in practice every day. That’s definitely a school that I plan on getting out to.”

Somerville said Ringo and Covington are also sitting on each of his shoulders trying to sway the 2021 recruit to pair up with them at their respective college destinations.

“(They’re trying to convince me) literally every morning at school and (Jacobe) is throwing up the ‘W’, everything,” Somerville laughed. “It’s hilarious how they constantly do it,”

Head coach Mike Norvell and offensive coordinator Kenny Dillingham have kept a close connection to Arizona, no matter where they’ve ended up. Having familiar faces on the other side of the country would help if Somerville went to Florida State and continued the early stages of an Arizona-to-Tallahassee pipeline with Chubba Purdy.

“Obviously, it’s far from home, but when you have coaches out there that care about you and are from the area you’re from, they obviously know what you’re going to go through so I think they have something good going on over there.”

Remember, when Norvell and Dillingham were the first to offer the then up-and-coming recruit when they were at Memphis. Both have kept that relationship going over the years now that they’re at Florida State.

The Wolverines have targeted multiple top-flight Arizona prospects over the years. They earned a commitment from Pinnacle quarterback JD Johnson before he had to medically retire, and to their credit, they honored his scholarship. They also were a finalist for Hamilton wide receiver Brenden Rice.

For Somerville, this is another relationship to keep an eye on. Former ASU defensive line coach Shaun Nua is currently holding the same position for the Wolverines, and their relationship goes back to when Somerville was an underclassman.

Great unofficial visit to Arizona State yesterday! Thank you for having me out, looking forward to coming back #ForksUp @shaunnua @RyneRezac @Fred_Gammage pic.twitter.com/WgoODRZPYZ

The Utes and Kyle Whittingham are about as consistent as can be in the Pac-12, and they have a rich tradition of developing defensive linemen. They’ve been able to get the likes of Solomon Enis and TJ Green to commit in recent classes and would hope the same for Somerville.

When talking to Somerville at the Under Armour Combine, he brought up Vanderbilt as a “big one” due to their academic credentials and being able to play in the SEC.

The Sun Devils have been very familiar with Somerville. Quintin’s older brother, Jordan, was a graduate assistant with ASU (more on that later) and while the Sun Devils have put a bulk of their attention on California’s recruiting landscape, coaches have spoken about attempting to keep the local recruits…local.

There are some coaches that are very, VERY familiar with Quintin on this staff. Danny Gonzales is leading the program now and Jordan, Quintin’s aforementioned big brother, is currently the receiving coach over there.

Happy birthday to my best friend, brother, and mentor, crazy to think about of how far we’ve come and what’s in store for our futures. I love you ugly boy, my words can’t describe how proud of you I am! pic.twitter.com/0BEvsRKfsd

Somerville plans to commit on June, 20th, his mother’s birthday.

“She’s helped me through everything. She’s been my rock, been my motivation. Whenever I’m down, she’s there rubbing my back. I couldn’t thank her enough so I wanted to dedicate that day to her.”

The list has been trimmed, but it’s safe to assume these top programs will be battling it out to earn a commitment from the top player in the 2021 class.